CraftNOW Philadelphia unites the leading institutions, artists and patrons of Philadelphia’s craft community to celebrate the city’s rich legacy of craft, its internationally-recognized contemporary craft scene, and its important role as an incubator for arts based in wood, clay, fiber, metal and glass.

For their fall fundraiser that takes place later this month on September 26, CraftNOW invited select artists to submit works responding to the theme of Philadelphia as a Craft Capital. The exhibition of the works will debut as part of the auction and raffle during this event only.   You can preview the objects in the auction here.

Don Miller was one of the artists chosen to submit a work for the fundraiser and he kindly asked if I would want to collaborate on the project as we’ve enjoyed working together in the past.  What follows is the statement we submitted to CraftNOW along with the work.  Below that is a series of images made during the planning and making of what we titled Philadelphia 1769 June 3ᴰ 5ᴴ 4′ 43″, referring to the Transit of Venus that occurred in 1769.  David Rittenhouse was the first person in American to observe and measure the transit.

“Philadelphia’s reputation as Craft Capital inspired us to work together, looking to the city’s historical material culture as a source for contemporary inspiration and meaning as craft practitioners. Is there an object that might convey the complexity of this past, pose questions and challenge us to respond from our present?

The Rittenhouse Orrery is a device  intended to demonstrate the relationship of our sun and planets as understood in 1771, the year of its creation by Philadelphia clockmaker David Rittenhouse (1732-1796).  Moreover, it represents Philadelphia’s role as colonial America’s center of scientific discovery, economic  ingenuity and technological innovation. Its casework, by cabinetmakers John Folwell and Parnell Gibbs, reflects the Chippendale stylings that epitomize urbane British colonial taste. As such, this object presents a complex picture of our city in a moment of revolutionary development and transformation, the confluence of craft and  technology laying the foundations for the “workshop of the world”.

The Enlightenment values that the Orrery embodied -a view of nature as absolute and unchanging- have, in the ensuing 200 years of “progress”, proven instead to be contingent, chaotic and somewhat incomprehensible. We hope to transverse this distance in the making of Philadelphia 1769 June 3ᴰ 5ᴴ 4′ 43″.

The seal used by the University of Pennsylvania from 1782-1847. It depicts ornaments on the case of the Orrery built by David Rittenhouse that are not present today.

An early draft  by Don Miller.

Working on the lower part of the piece at UArts.

A working drawing of the cornice. 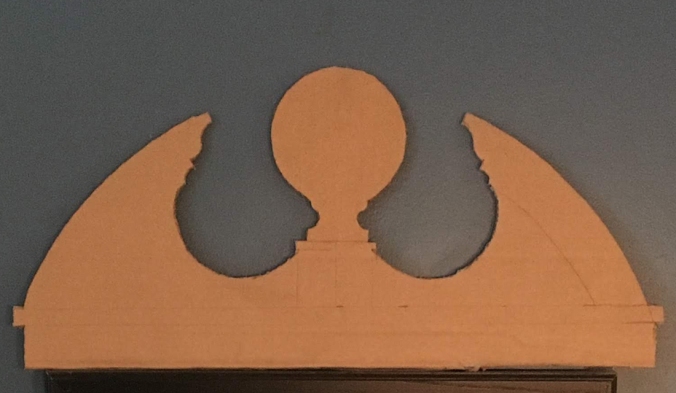 Mock-up of the cornice to determine proportion of the sphere.

Carving the sphere and its integral base.

After bleaching the wood, several coats of tinted Osmo oil was applied.

After the finishing was completed, the black glass panel was installed and the completed object was photographed at UArts. 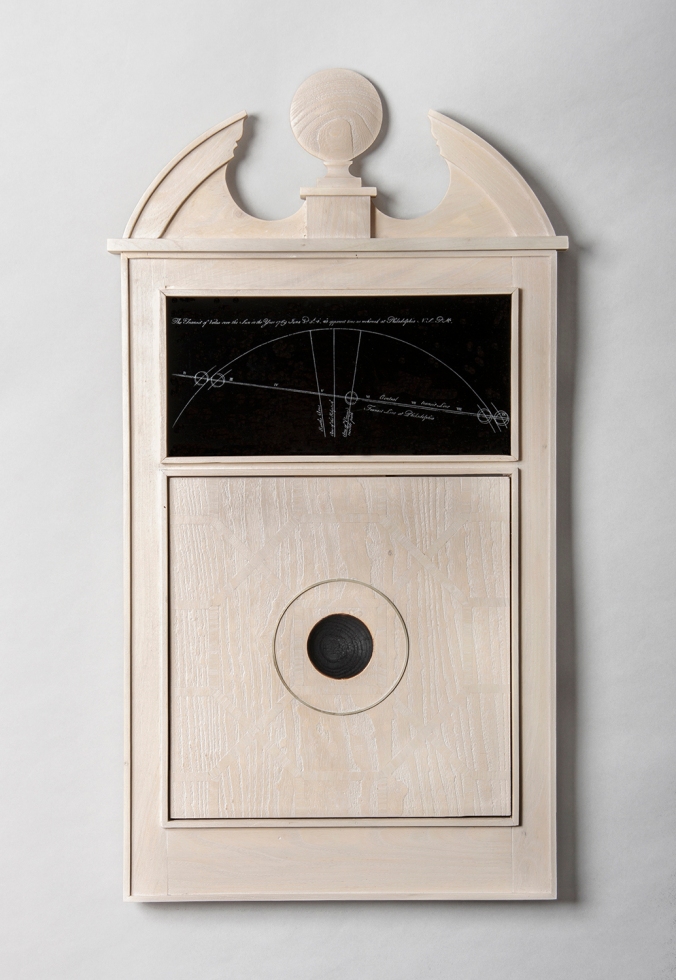 Philadelphia 1769 June 3ᴰ 5ᴴ 4′ 43″   Made in Philadelphia, 2019.  Made by Don Miller and Christopher Storb.  Catalpa, brass, glass.  A contemporary depiction of the Transit of Venus was sandblasted on the black glass panel.  An inlaid brass ring surrounds a turned depression that has been scorched with a flame.