Approaching the main house on her way to the drawing room, a visitor in the 1760’s would be struck by the disciplined symmetry of the façade and skillful use of the classical orders. Perhaps the similarity to several buildings in town, whether recently completed or existing only as engraved prints, would be noted.

“A South East Prospect of Pennsylvania Hospital” by Henry Dawkins and John Sleeper, 1761. Construction began in 1755 but due to lack of space and funds only the east wing was completed at the time this print was initially offered for sale in 1761. Construction was not begun on the central and west wings until 1793. The central wing, which would have born a striking similarity to Mount Pleasant, was redesigned in the neoclassical style in the early 1790’s.

Paul Goldberger says “we talk about facades in terms of how they look; we talk about spaces in terms of how they feel.” The combined depth of the columns and rusticated door frame, the heavily moulded arch and large keystone above and the low height of the door create the sensation of moving through a short, low tunnel. This feeling of compression makes moving from the great expanse of the exterior landscape to the hall beyond the door more dramatic than it would be if you entered through the type of tall door commonly seen in town houses, where a vestibule often served as a transitional space. 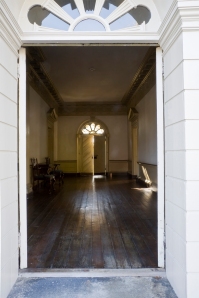 The hall is dimly lit but the staircase on the left of the door, set off by full height fluted pilasters, is brightly illuminated by four large sash windows. 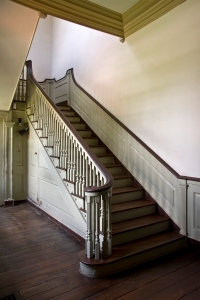 Moving up the first flight of stairs to the landing creates a similar sensation of compression as you pass between the columns and close to the first story ceiling. Making a complete turn on the natural resting-place of the landing you get your first glimpse of the carved Ionic capitals on the full height fluted columns framing the staircase as the second story hall stunningly opens up in front of you.

Past the columns you experience the interior counterpart of the Venetian window of the facade brightly illuminating the hall in stark contrast to the low light levels of the first story. The interior spaces have been unfolding in stages, how we gradually experience these spaces over time is different than the immediacy with which we observed the façade. 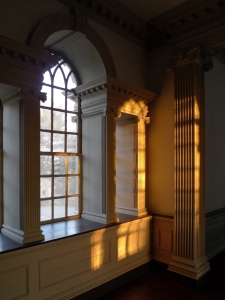 Proceeding to the drawing room at the end of the hall you pass another Venetian window identical to the window by the stair. You may have sensed yourself tracing a spiral as you moved through the house, the twist at the bottom of the stair railing and the volutes of the Ionic capitals throughout the second story hall materially reinforcing your physical sensation. 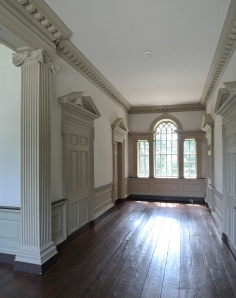 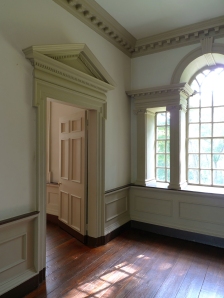 The drawing room was meant to impress. Raking light from two large windows defines the carving of chimneypiece, door brackets and keystones on the south wall. Moving into the room and turning around you would notice the four large carved brackets on the door to the hall and the fixed door placed for symmetry beside it on the north wall. Through the windows you could view the natural landscape of the terraced garden and the river beyond. The full cupboard to the right of the chimneypiece has shaped shelves, plate grooves, and curving balustrades that would be used for the display and storage of silver or ceramic objects for tea and coffee service. 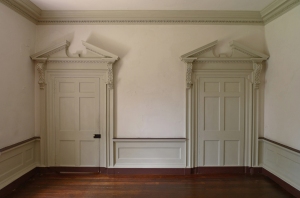 No inventories of furnishings are known to exist for Mount Pleasant during the Macpherson’s occupancy but one of the last charges Nevell made for work at Mount Pleasant was for hanging four looking glasses.

Is it reasonable to suppose at least one was hung in the tall, rectangular tabernacle frame of the chimneypiece reflecting the ornamented door you entered? Might there have been a looking glass hung between the doors on the wall opposite reflecting the chimneypiece? To date, none of the twentieth century furnishing plans has “reflected” this idea.

2 thoughts on ““The architect models in space as a sculptor in clay.” Geoffrey Scott, The Architecture of Humanism”