Last month I attended the second session of Working Wood in the 18th Century, Desks: The Write Stuff, in Colonial Williamsburg. This was the 17th annual conference during which the staff of the Anthony Hay Cabinet Shop explore the design and construction of 18th century furniture through their reproduction of the objects, and the demonstration of aspects of the construction process on stage. Objects chosen for investigation in the past were most often those made in mid-18th century colonial Virginia. The reproduction by Bill Pavlak of a Philadelphia scriptor with a stamped name and date – Edward Evans/1707 – in the collection of the Colonial Williamsburg Foundation, one of three core presentations, was the reason I attended. I had examined the scriptor a little more than a year earlier with the CWF furniture curator and Furniture and Wooden Artifacts conservator as part of my research on late 17th and early 18th century Delaware Valley furniture. I was interested to hear any new insights from all those involved with examining and reproducing the scriptor. The biggest surprise did not, however, concern the scriptor but another object discovered in the CWF collection during the preparations for the conference – another scriptor! 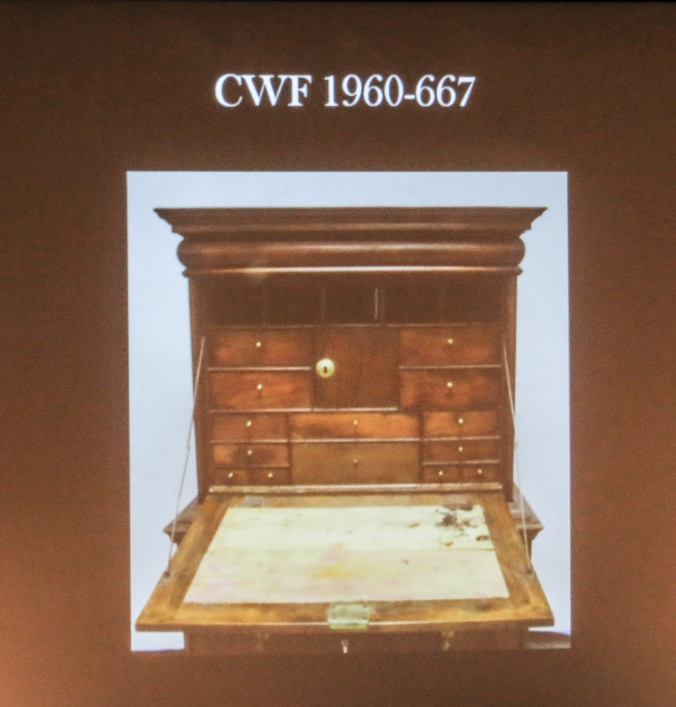 The recently re-discovered scriptor entered the collection of CWF in 1960.

Less than half a dozen American scriptors survive and many students of American furniture “would be hard pressed even to define the term “scriptor,” though that furniture form was nearly universal in the aristocratic interiors of late seventeenth-century England”. The form is so unusual in America we don’t even have a consensus of what to call it. The discovery of another American scriptor then is an event in the study of early 18th century furniture from any colony. 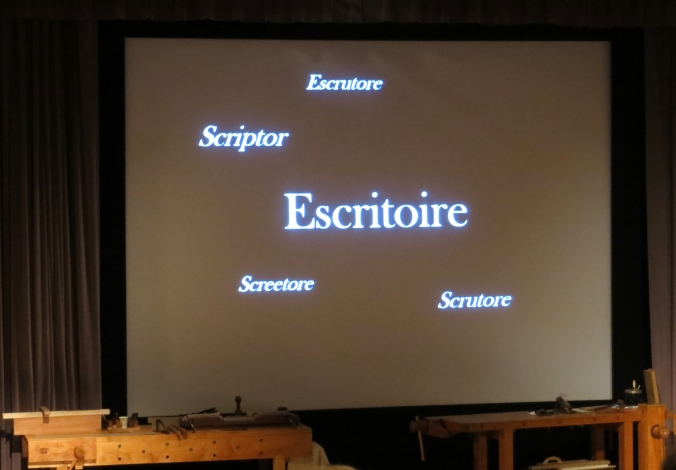 What should we call this form the Colonial Williamsburg staff asks? 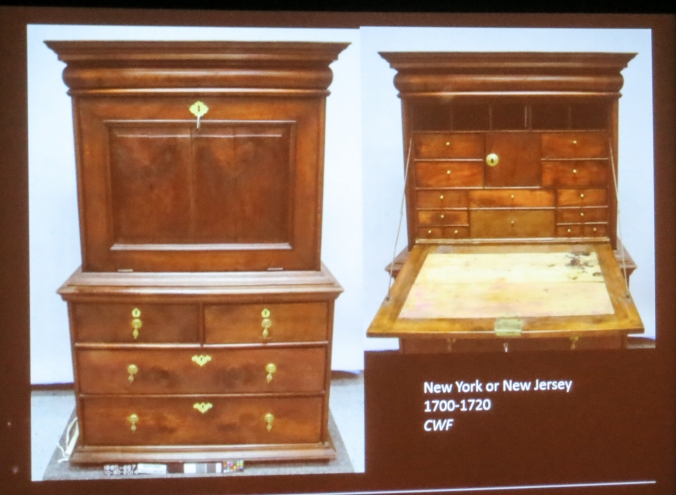 A screen shot from the conference shows the scriptor with the large fall front open and closed.

CWF currently attributes the scriptor to New York or New Jersey based on provenance of early owners place of residence though the scriptor apparently was taken to England, maybe as early as the early 1800’s according to the CWF curator Tara Chicirda who spoke at the beginning of the conference. 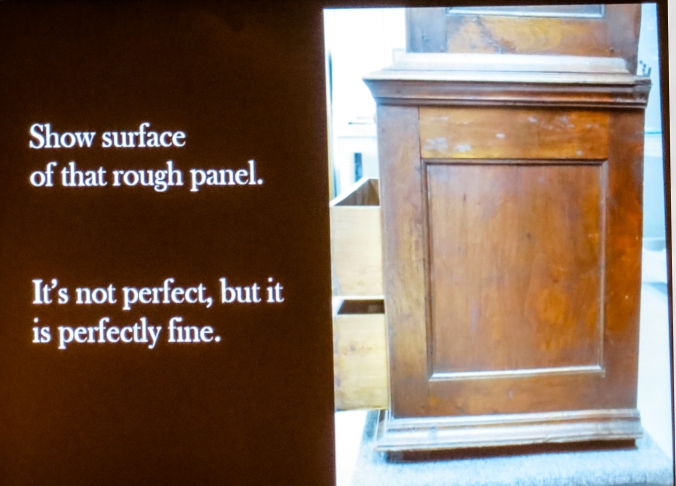 The sides of the scriptor are frame and panel construction. The primary wood is said to be solid black walnut. The feet are missing. 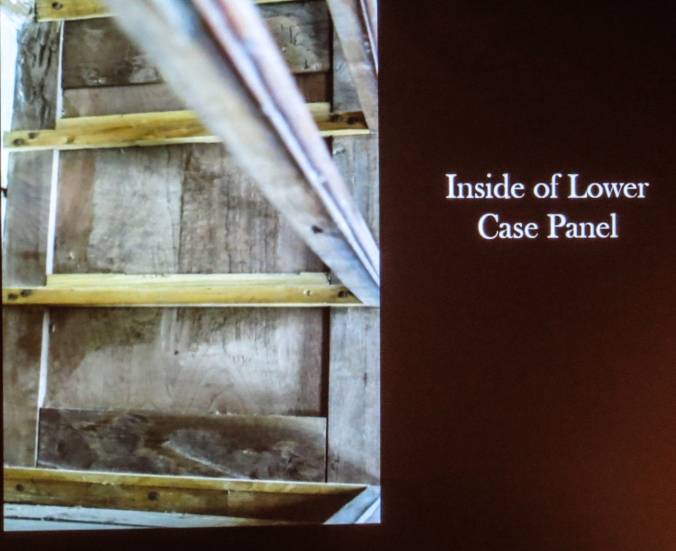 Interior of the lower case.

At this point I have not personally examined the newly re-discovered scriptor and rely here on comments of the presenters and the images shown on the large screen on stage. 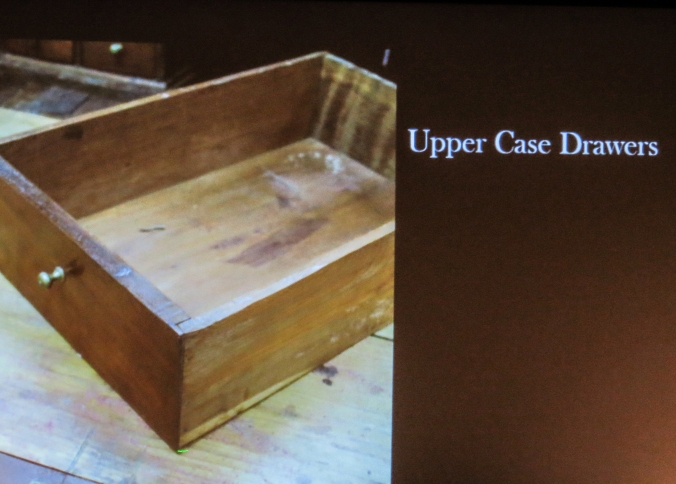 A small drawer form the upper desk section. The sides are nailed to the front and back. 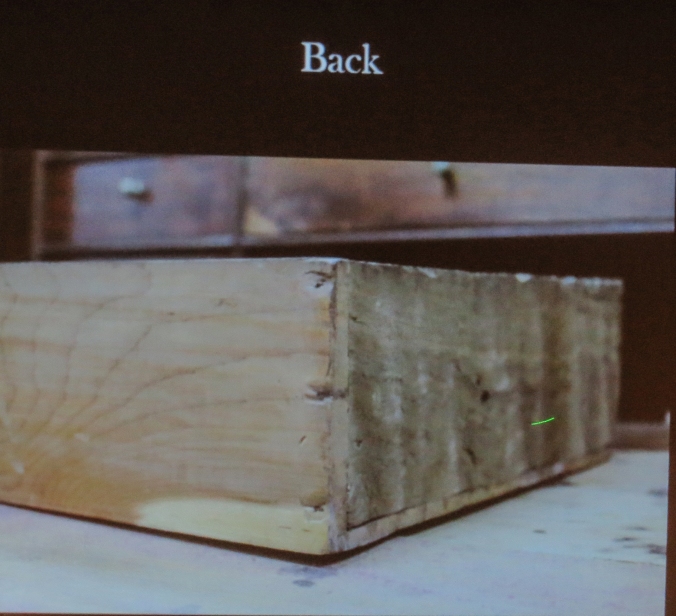 Nailing of a small interior drawer side to the back. 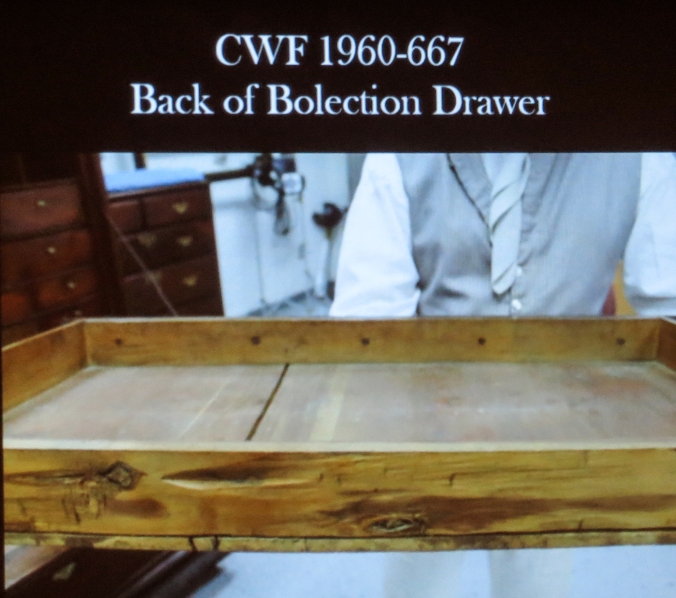 A view of the back and interior of the frieze drawer. The swelled front is nailed to the the drawer face with rose-head nails from inside. 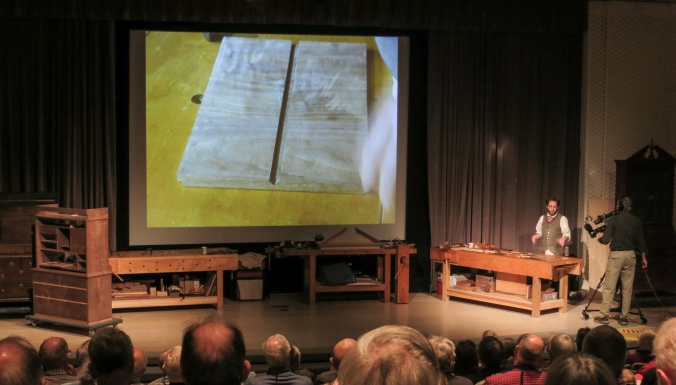 I enjoyed all the presentations, especially that on the scriptor, and understand the enormous amount of work that goes into organizing and preparing for such a conference, let alone one that is run twice over the course of a week and a half. The chance to learn about the re-discovery of a rare American furniture form was an added bonus. I’m looking forward to another trip to Williamsburg to have a closer look!

2 thoughts on “A Scriptor Re-discovered”