A comment on a previous post about enclosed bonnets on mid-18th century high chests cited another solution to their design. Instead of a flat board running front to back supporting the superstructure, a round, a roughly shaped bolt of yellow poplar or white cedar could be fit between the tympanum and the backboard which had been cut to match the profile of the tympanum. The thin “roof” boards were nailed to a rabbet in the bolt allowing a flush fit. This construction can be difficult to decipher from photographs where elements behind and above the scrolls appear as a dark mass due to accumulated dirt and the oxidation of the surfaces.

The high chest dated 1753 in the collection of the CWF utilizes this form of construction. 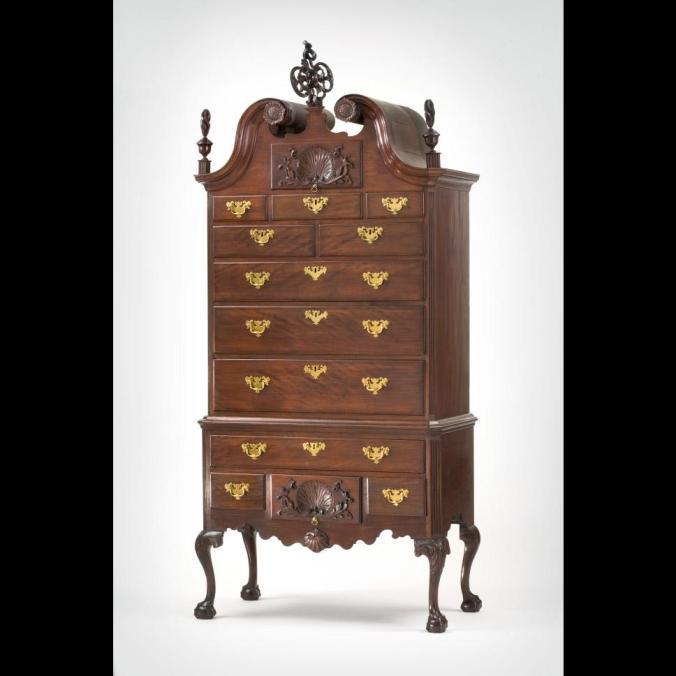 This desk and bookcase also employs the approximately three and a half inch diameter bolts running front to back between the tympanum and backboard..

Interestingly the backboard of the second high chest of the bonnet post has a backboard shaped to the same profile as the tympanum even though vertical boards, not round bolts, are used for support.

A high chest deaccessioned from Chipstone is similarly constructed.

High chest, Philadelphia, c. 1755
Formerly in the collection of Chipstone.

Was this done to provide the option for either method of construction? Or was the shaped backboard part of the decorative scheme at the top of the chests?

Joiners dealt with this aspect of chest superstructures in various ways. Another variant had the backboards shaped to match the scrolls so it could support the “roof” boards but left full across the span of the center of the top as seen in the next images. This high chest is constructed with a separate, removable cornice similar to the first high chest in the previous post.