In this blog I don’t write about my day-to-day work with the Dietrich American Foundation’s furniture collection that we are in the process of researching, photographing, and conserving. That will remain proprietary to the Foundation as we gear-up to go live with a website of the Foundation’s collection in the near future. Findings from the furniture survey will also hopefully find their way into publications in various formats. I have relied on my extra-curricular activities and earlier years involved in the conservation and restoration trade for material for posts. This post is a slight divergence. 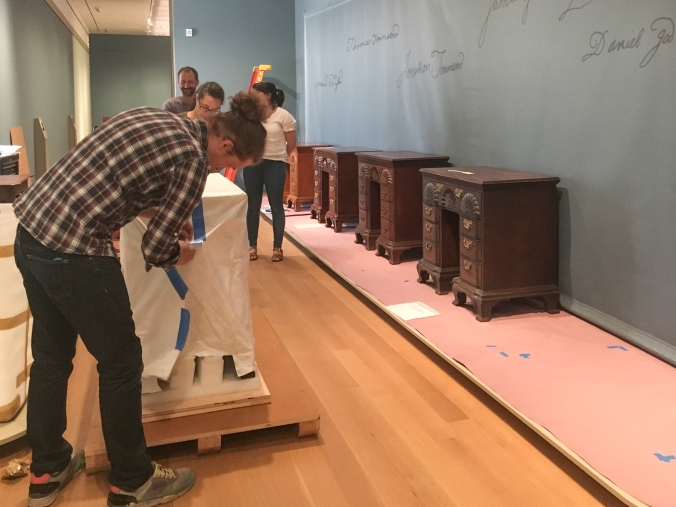 Later this month the exhibition “Art and Industry in Early America, Rhode Island Furniture, 1650-1830” opens at the Yale University Art Gallery. The Dietrich American Foundation’s four-shell Goddard family bureau was loaned to the Art Gallery for the exhibition and I was in New Haven this week attending the bureau’s installation at the end of a line of four other three and four-shell bureaus made in Newport in the second half of the eighteenth century.

The line up of Newport three and four-shell bureaus.

“Daniel Goddard His Draugh” is written in white chalk on the back of the top long drawer.

The back of the top shell drawer of the D.A.F. bureau.

Did Daniel participate in crafting the bureau, did he carve the shell drawer, or was he the owner? Was it made in Newport in the shops of the Goddards and Townsends or in Nova Scotia where Daniel appears to have moved sometime after 1779? The early provenance of the bureau is unclear, we can only go back to its discovery in London in 1968. It possibly left New England with Daniel Goddard when he moved from Newport to Nova Scotia. If that was the case, this is likely the first time the bureau has been in back New England in over two hundred and twenty-five years.

The D.A.F. bureau as you will see it in the exhibition.

You can read more about the bureau at the Rhode Island Furniture Archive here.

2 thoughts on “A Sneak Preview: Newport in New Haven”