The joiners who immigrated to the Delaware River Valley in the last quarter of the seventeenth and the first quarter of the eighteenth centuries, and the American-born joiners they trained, had a choice of timbers to use for secondary elements in their furniture. In Britain, the hardwood white oak (Quercus alba) and two softwoods, Red or Scots Pine, (Pinus sylvestris), and Norway spruce, (Picea abies), both referred to in the trade as deal, were the principal wood species used as secondary woods.

The slow-growing, finest grain oak, known as wainscot, and the two softwoods had to be imported into Britain. In the Delaware River Valley, there was an abundant supply of old-growth, slow-growing white oak, which was used primarily as drawer linings in the earliest joiner’s shops. 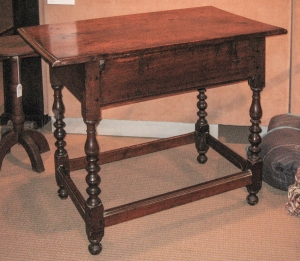 Table with drawer. Made in the Delaware River Valley, c. 1725. Black walnut, white oak, Atlantic white cedar. (photo shows the back of the table.) This table is attributed to the Bartram Family joiner. The drawer has riven white oak sides and back and is constructed similarly to the drawers in Brewster Spice box. 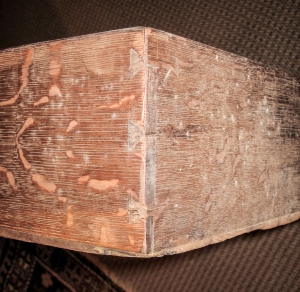 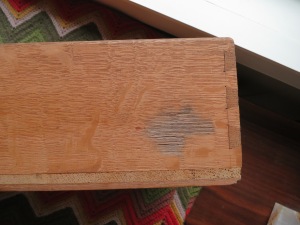 Chest on chest. Made in the Delaware River Valley, c. 1738. Black walnut, white oak, Atlantic white cedar, yellow poplar. Split grain is sometimes seen on outer surfaces of riven white oak drawer sides and backs. In this case, the riven board weathered to gray before it was planed during construction of the drawer. 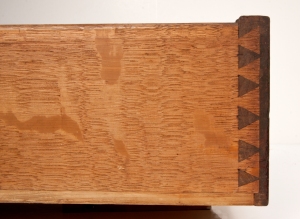 Chest on chest. Made in the Delaware River Valley, c. 1738. Black walnut, white oak, Atlantic white cedar, yellow poplar. The drawer is made with unusual and meticulous dovetails. Two other chests on chests by this anonymous joiner are dated 1738. 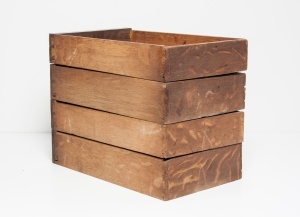 Several species of hard pine grew on both sides of the Delaware River that resembled Scots Pine and Norway spruce in strength, working properties, and appearance. The North American relative of Scots Pine (Pinus sylvestris) is red pine (Pinus resinosa). Species of the yellow or hard pine group found in the Delaware River Valley include long leaf pine (Pinus palustris), shortleaf pine (Pinus echinate), loblolly pine (Pinus taeda), and pitch pine (Pinus rigida). The several species of hard pine cannot be differentiated from one another microscopically and it follows that we are unable to visually identify distinct species of hard pine when examining furniture. The gross characteristics of red pine corresponds to the various species of hard pines but is microscopically unique and can be separated from all other North American hard pines. Hard pine was used primarily for drawer sides, backs, and, infrequently, bottoms; tops, bottoms, and backs of dovetailed carcasses, and backs and bottoms of framed forms. Hard pine was also occasionally used as a primary wood for forms more typically made of walnut and was often used for plain storage chests and tables for secondary rooms such as kitchens. 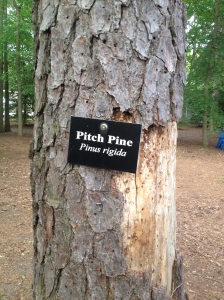 The various hard pine species can be distinguished in the forests from bark, needle, and cone samples. In South Jersey they know their pines and want to make sure you do too! 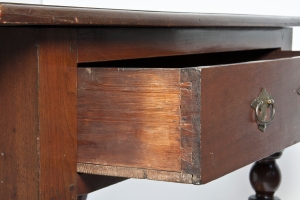 Table with drawer. Made in Philadelphia, c. 1710. Black walnut, hard pine. The only secondary wood of this early Philadelphia table is hard pine used for the drawer sides, back, and bottom. 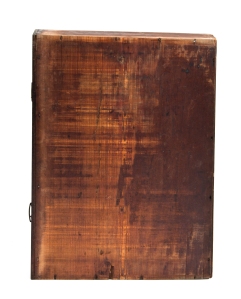 Table with drawer. Made in Philadelphia, c. 1710. Black walnut, hard pine. The bottom of the drawer is a single board sawn near the center of the tree so it is effectively quartered on each side of a narrow section of flat sawn wood at the center. After more than 300 years there is left than one quarter inch shrinkage of an eighteen inch wide board. 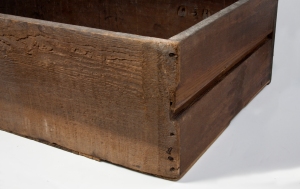 Chest of drawers. Made in the Delaware River Valley, c. 1720. The drawers of this framed chest are side hung, a relatively rare drawer construction in Delaware River Valley furniture. All three local secondary wood species are used in one drawer, white oak for the sides, hard pine for the back, and Atlantic white cedar for the bottom.

Chest of drawers. Made in Philadelphia, c. 1735. The fine quality of hard pine available in the early eighteenth century is seen in this drawer side. It is cut from a tree that grew very slowly and perfectly straight.

By at least the early eighteenth century, joiners had added another wood species to their furniture making, Atlantic white cedar (Chamaecyparis thyoides). Carpenters favored the woods light weight, rot resistant properties, and its ease of working, especially when riven, employing white cedar for siding on frame buildings and for roof shingles of frame, brick, and stone buildings. Joiners adopted the practice of carpenters, riving bolts of white cedar and edge joining the edges to produce three-foot-wide drawer bottoms of quartered wood that eliminated shrinkage problems encountered when using single wide, flat sawn boards. White cedar bottoms produced a lighter drawer than an oak or hard pine bottom and the aromatic, sweet scent was pleasant and may have acted as an insect repellent when drawers were filled with costly woolens. White cedar was also used for elements where strength was not necessary such as backboards, dustboards, and glue blocks.

High chest of drawers. Made in Philadelphia, 1738. Maple, hard pine, Atlantic white cedar. At least seven thin riven cedar boards edge joined together make up the bottom of this drawer. A large patch of split grain is visible. 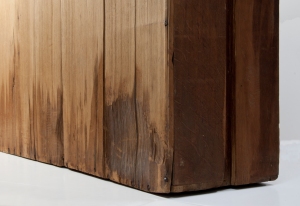 Chest of drawers, made in the Delaware River Valley, c. 1720. Another drawer from the framed chest with side hung drawers showing split grain that was not planed because of the changing grain direction. 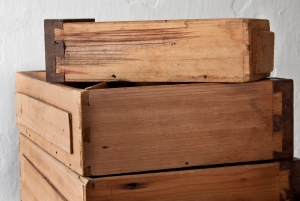 Spice box. Made in Southeastern Pennsylvania, c. 1760. Black walnut, Atlantic white cedar, yellow poplar. The linings of small drawers were sometimes made entirely of riven white cedar. The demand today – from customers, collectors, gallery owners, and furniture makers themselves – to produce highly finished surfaces inside and out means we are unlikely to see this type of surface topography coming out of contemporary makers shops.