If you’re a carver, woodworker, or interested in the history of edge-tools you will recognize some or all of the names in the title of this post. “ADDIS” in one form or another was imprinted on edge-tools produced in England, primarily woodcarving tools, for well over a century. Many of the carving tools made by members of the Addis family survive and are sought out and used by professional and amateur carvers. The Herring Brothers may be less well known but edge-tools with their imprint are as well regarded as any produced by the Addis family. Indeed, one of the Herring brothers moved from Sheffield to London to apprentice with Samuel Joseph Addis. Ward & Payne is known as a Sheffield edge-tool manufacturer that employed one member of the Addis family and bought the rights to use the name of another member after his death.

There are many reasons why we might choose to use historic tools today. Carving tools made in England in the nineteenth century have the reputation of being the best ever made, superior to tools available today. There is a romance and nostalgia about tools used by prior generations of carvers whose names are often found stamped on their handles – wishfully thinking some of the skill of a bygone master will rub off on us. But I own and have used carving tools from all the nineteenth-century makers as well as most manufacturers making carving tools today and find a properly shaped and sharpened modern tool works as well as its historic counterpart whatever the metallurgical differences between them may be. There are real, factual differences however that would warrant seeking out historic tools, but the main reason I started acquiring them was the pricing. Carving gouges continue to be labor-intensive to make and as a result are expensive. This is often an impediment to someone starting out in the field or to someone who might want to try woodcarving but is unsure if they will enjoy it and wish to continue with the practice. Used or second-hand tools, for which both historic and contemporary tools qualify, are (with some exceptions) typically less expensive than new tools – often by half.

But when, after many years, you have built up a sizable collection of old tools, the historian in you wants to know more. Who were these makers?  What years did their working careers span? Are there other makers I don’t know about because I have never found one of their marked tools? What were the “prize medals” we see imprinted on tools from several makers awarded for? And why so many different imprint versions, especially in the case of S. J. Addis (1811-1871) who seems to have purchased a new stamp every several years to imprint his tools?

Several studies of the Addis family, which also touch on the family’s connection with Ward & Payne and the Herring brothers, have been web published and they inform the captions for the following illustrations. The links are here:

Addis: A Famous Name in Carving Tools by Geoffrey Tweedale

Gary P. Laroff published his overview in 2006 and I know from correspondence with him that he has gathered additional information since then including previously unrecorded imprints.

Though I had not known it before I read Laroff’s overview, I was not surprised to find the Addis family of edge-tool makers worked in Deptford, a district in south-east London that from the seventeenth to nineteenth centuries was a Royal Dockyard town. It was in Deptford that Grinling Gibbons (1648-1721) family had settled and where he may have worked in ship carving before catapulting to fame with encouragement from the connoisseur and diarist John Evelyn (1620-1706). Historically, carving tool makers would be best served working in proximity to the end users of their products. A close working relationship between the carvers and tool makers was useful and necessary in London from late seventeenth into the eighteenth century when intense technical demands were placed on woodcarvers, particularly in the case of the Gibbons shop. With carving tool makers and carvers living and working within blocks of one another, experimentation with new shapes and sizes of tools could happen in real-time

The histories concerning the Addis family as edge-tool makers take us back not much earlier than 1792 when Samuel Addis (1768-1832) is recorded working in Church Street, Deptford. It is uncertain if earlier generations of the Addis family worked in the trade or how long the family had been in Deptford prior to this time. Late nineteenth century advertisements proclaim the Addis family tradition of edge-tool making was “Established in 1717” but there is no published evidence for this.

It is undeniable, however, that forging, hardening, and tempering carving tools is an exacting Art and Mystery and a trade whose secrets were handed down through generations. Whenever the Addis family began their tradition of making carving tools it is cannot be a coincidence that the most successful dynasty of carving tool makers hail from Deptford, the parish that launched the career of the “Glorious Grinling Gibbons”.

ADDIS imprint, with no initials, address, or sweep number. This is thought to be the earliest imprint of the Addis family. It is most likely the imprint used by Joseph James Addis (1792-1858). Joseph James was apprenticed to his father Samuel Addis, an edge-tool maker in Deptford, who apparently left the trade by the time he is listed as working as an auctioneer in the 1820s. It is not known how Samuel Addis marked his tools. Did he also us an ADDIS imprint and if so, is there any way to tell whether father or son made a tool so marked? A small number of ADDIS imprinted tools survive.  Storb Collection.

A carving tool with the imprint ADDIS. This is a clear ADDIS imprint on a tool that has survived in very good condition. Private collection.

ADDIS SENR imprint. Thought to be the imprint used by Joseph James Addis to differentiate his work from his son Samuel Joseph Addis (1811-1871) after S. J. Addis completed his apprenticeship and went into business for himself. This tool may date from the late 1830s to the mid-1850s. Storb Collection.

This S. ADDIS imprint is a bit of a mystery. The font, size, and neat placement of the imprint are similar to S. J. Addis imprints but it is not clear where it fits into the chronology of the following illustrated carving tools. I know of only a handful of tools with this imprint. Storb Collection.

A carving gouge with the imprint S.J. ADDIS JUNr and a Deptford address imprint on the reverse. This tool was for sale on the web several years ago. Private collection.

The reverse of the tool in the previous image with the imprint 12 DEPTFORDGREEN. To my knowledge no information about S. J. Addis at this address has been published.

The imprint LONDON often accompanies the S. J. ADDIS JUNr imprint. Mid-1840s to mid-1850s. Is S. J. Addis the first carving tool maker to add the city where he worked to his imprint? This may be the imprint used on the carving tools S. J. Addis displayed at the Great Exhibition in 1851. Storb Collection.

From the early 1850s to 1863 S. J. Addis is listed at 20 Gravel Lane. The tools produced during this period have 20 GRAVEL LANE and SOUTHWARK LONDON imprints. Storb Collection.

The reverse side of the tool in the previous image. 1853-1863. Storb Collection. 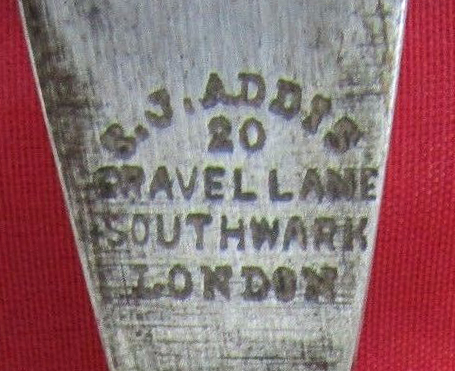 A variation of the 20 Gravel Lane imprint. This imprint was also used on plane blades.

In 1862 S. J. Addis moved to Worship Street, Finsbury, London. A new stamp with that address was ordered to imprint the tools. 1863-1869. Storb Collection. 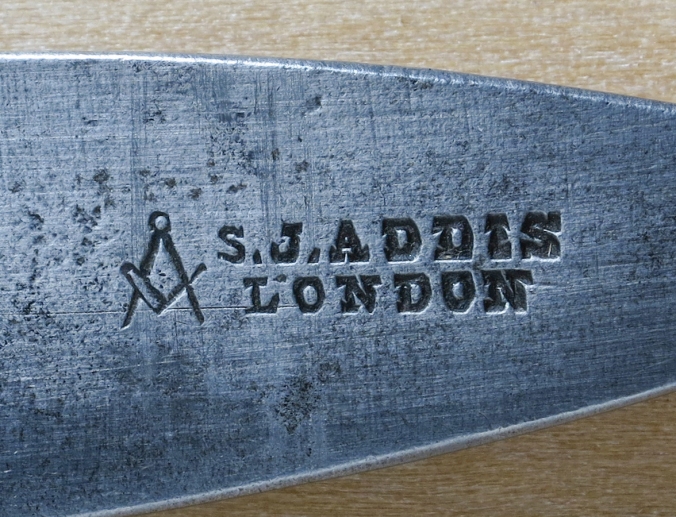 Compass and square followed by S. J. ADDIS. This imprint is more commonly found than those on the previously illustrated tools.  Carving tools with this imprint are also found marked with the Sheffield/London sweep numbering system.  It may have been made shortly before S. J. Addis’s death or by the Sheffield firm Ward & Payne who purchased the rights to use S. J. Addis’s name from his widow. Storb Collection.

This is a carving tool made by the Sheffield firm Ward & Payne whose imprint, W and P on either side of an anvil below two forging hammers, precedes S. J. ADDIS over CAST STEEL. This tool has a sweep number and ENGLAND stamped on the reverse. 1895-1915. Storb Collection.

15 thoughts on “The Addis Family, the Herring Brothers, and Ward & Payne”