With an ashlar base beneath thick rubble stone walls covered in stucco, brick quoins on the corners, and cut stone jack arches above the sash windows, the facades of the main house at Mount Pleasant were predominantly the concern of the masons.

But it is the woodwork that describes the interior spaces, creates their variations of hierarchy and provides a language of ornament that could be read by the owners of the house and their visitors.

Mount Pleasant drawing room. “Colonial Architecture For Those About To Build”, by H.C. Wise and H.F. Beidleman, 1913.

By the mid-1750’s, the plates in Abraham Swan’s The British Architect, first published in 1745, were beginning to influence Philadelphia architecture. Naturalistic rococo designs were wedded to an underlying proportioned classical structure. It was a style that would flourish in the city for over two decades. 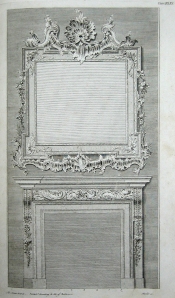 The main house at Mount Pleasant was one of the earliest to employ this new style to a significant extent as part of the overall design concept of the interior spaces. As Philadelphia’s wealth and population grew during the 1760’s, numerous building campaigns for the affluent followed in the new mode so indebted to Swan’s designs.

Powel House, second story, back room. “The Colonial Homes of Philadelphia and Its Neighborhood”, by Harold Donaldson Eberlein, 1912. In 1770 Samuel Powel (1738-1793) extensively re-modeled a townhouse on Third Street that was less than four years old. This chimneypiece seen in situ, was removed in 1917 and installed in the American Wing of the Metropolitan Museum of Art.

At the end of the nineteenth century, Mount Pleasant began to be noticed by a new generation of architects and scholars investigating the architecture of colonial America. In 1897 the Philadelphia architect Charles L. Hillman (1859-1934) produced measured plans and elevations of Mount Pleasant for a series of periodicals published by the American Architect and Building News Co. titled “The Georgian Period, Being Measured Drawings of Colonial Work”. Included were details of the north wall of the drawing room. 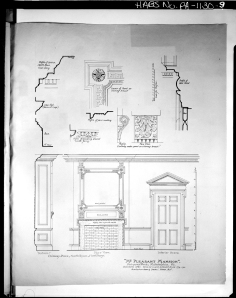 Mount Pleasant dining room as measured and drawn by Charles L. Hillman in 1897. Collection of the Free Library of Philadelphia.

Mount Pleasant. Detail of the staircase and north wall of the drawing. Charles L. Hillman, 1897. Collection of the Free Library of Philadelphia.

For the publication Colonial Houses, Philadelphia, by Philip B. Wallace, M. Luther Miller produced scale drawings of the parlor and the drawing room sometime prior to 1931.

In 1932 Mount Pleasant was more extensively surveyed just prior to the official establishment of the Historical American Buildings Survey (HABS) in 1933. These measured drawings, if somewhat cramped on the page, are a impressive record of the site though they cannot be relied upon for complete accuracy. 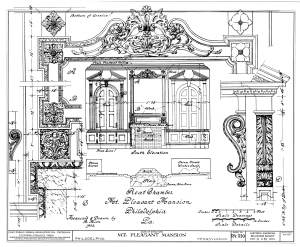 Throughout the HABS drawings there are indications of materials – wood, plaster, etc. These indications, with few exceptions, are accurate. As specified on the HABS survey of the drawing room, only the ceiling and the walls above the wainscot on the north, west, and east walls have a plaster finished surface. All the other surfaces, aside from the stone fireplace opening surround and hearth, are wood.

The Historic American Building Survey was established to document “the rapidly disappearing examples of early architecture and historic structures throughout the country.” We are lucky that Mount Pleasant survives to this day. It is important for current and future generations to build on the work of the past and continue to study, analyze, and interpret the site.