It wasn’t my intent to start a discussion of the clock cases documented and attributed to John Head’s shop until later this year, but to be topical I must mention this 8-day clock by Peter Stretch (1670-1746) in a black cherry case attributed to Head to be sold as lot 6054 of the E. Newbold and Margaret duPont Smith collection at Sotheby’s on January 21. 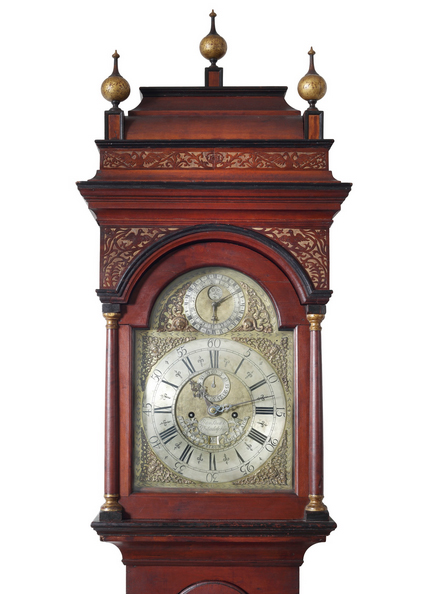 The substantial pre-sale estimate is based on several factors including the sale of a clock by Peter Stretch in a carved mahogany clock case in 2006 for $1,688,000, now in the collection of Winterthur Museum. In addition, the dial of this clock is arguably the loveliest made by the Stretch’s, versions of it appearing on clocks signed by both Peter and William Stretch, that were most likely made throughout the 1730s. There is herringbone engraving along the edges of the dial plate, the complication in the arch shows both the phases of the moon and the times of high and low tide in Philadelphia, (which is, of course, “tied” to the moon’s apparent motion) and a specially designed pierced and engraved name boss has the makers name and city surrounded by foliate scrolls, a pair of birds in flight (Time flies!), and the motto of the Worshipful Company of Clockmakers, the City of London livery company established by Royal Charter granted by King Charles I in 1631, “Tempus Rerum Imperator”, or Time is the ruler of (all) things. That the case can be attributed to a specific maker adds to its cachet. 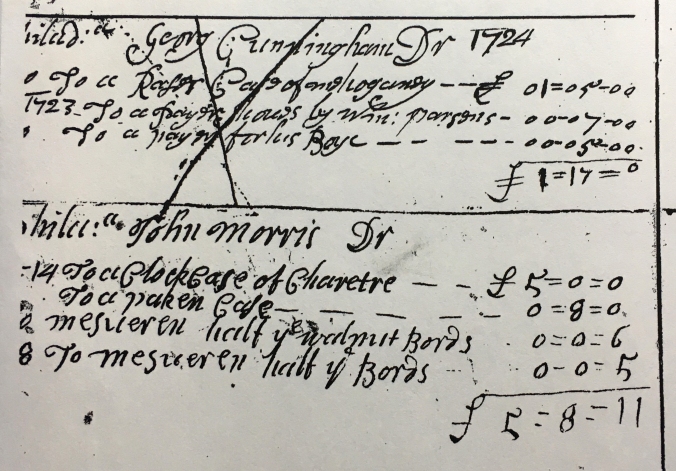 With John Head debiting his last cherry clock case in 1737, his ending his furniture production in 1744, and Peter Stretch’s demise in 1746 you wonder why the auction house dates the clock to “circa 1750”. Nit picking? Perhaps, but even auction houses don’t regularly date objects after the death date of the maker. “Circa 1735” would more accurately reflect the style of the dial and the evidence of Head’s accounts.

I worked in the shop that restored this case in the early 1980s. It is in very intact condition as these cases go though perhaps not quite as good as the catalogue description leads on. I’m not exactly sure why we gilded the hood column capitals and bases and picked out some of the mouldings with japanning. It’s not something I would do today. Perhaps the fact that the case has a brass oculus surround in the waist door prompted the gilding. Of the dozens of clock cases we now attribute to the John Head shop, if a brass oculus is present, the hood columns employ cast-brass mounts at their capitals and bases. When the oculus surround is wood, the columns are turned entirely of wood. This case is an anomaly in regard to the materials of the surround and column capitals and bases. 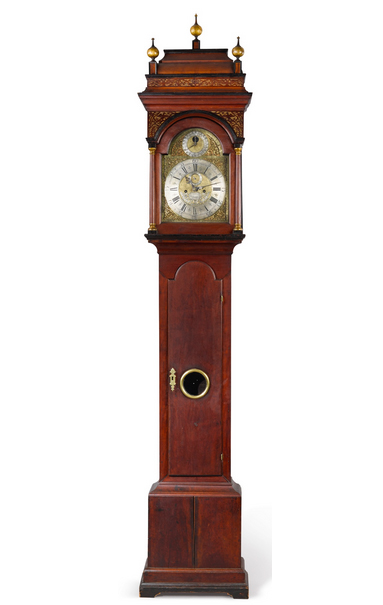 Stiefel writes of Head’s phonetic spelling in his supplementary article, “The Head Account Book as Artifact.” What today we know as black cherry (Prunus seotina), Head wrote variously as “Charetre”, Chare Tree”, Chari Tree”, and “Chary Treewood.” Making entries in his ledger in the last hours of daylight of a long summer’s day, or by candlelight in winter, Head spelled it as he spoke it. 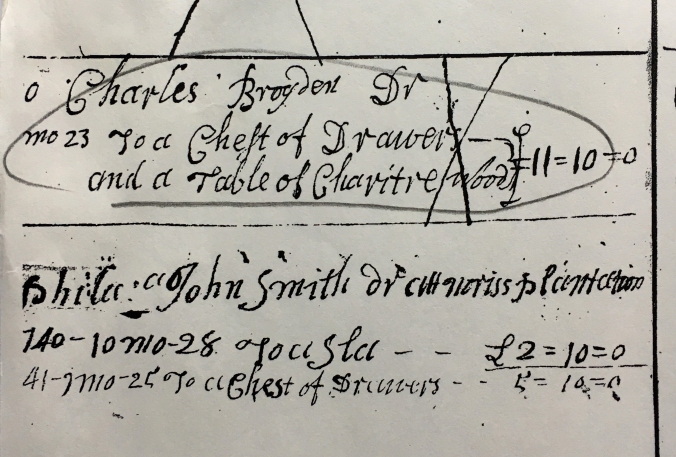 A variant spelling of cherry, used in making a “Chest of drawers and Table.” 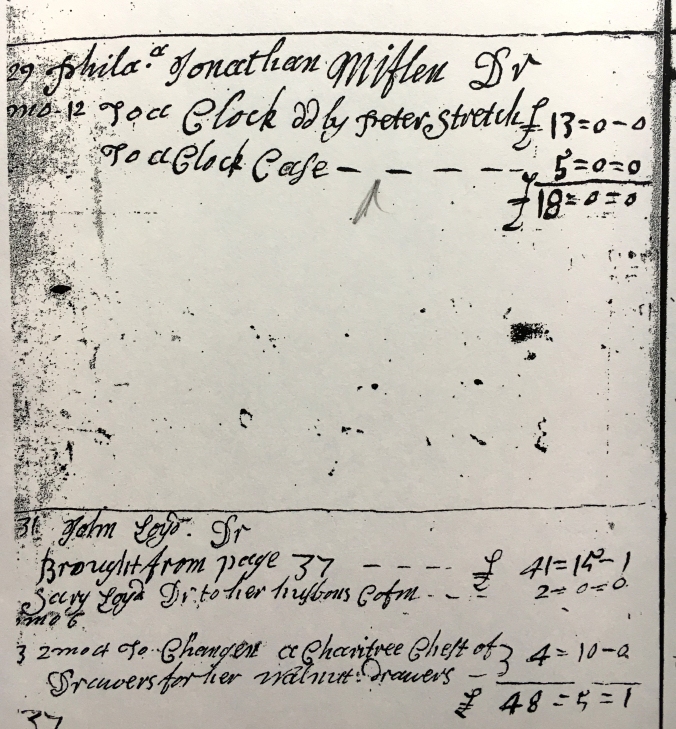 Head debited a clock case at 5 pounds along with a clock delivered by Peter Stretch to Jonathan Miflin in 1729. The undesignated primary wood could have been, cherry, maple, mahogany, or cedar. An interesting exchange at the bottom of the page – rewritten from another page in the ledger – continues the account of “John Loyd” with debits to his wife for the purchase of her husbands coffin and the exchange of her walnut chest of drawers for a “Charitree” chest.

One thought on ““To a Clock Case of Charetre””