In January 1990 Christie’s sold the collection of May and Howard Joynt of Alexandria, Virginia. Lot 469 was described as “A Fine William And Mary Walnut Chest Of Drawers, Pennsylvania, 1720-1740” and carried an estimate of $6,000-$9,000. On January 19th, 2017, Sotheby’s will sell the same chest now described as A Very Fine and Rare William And Mary Walnut Chest Of Drawers, Pennsylvania, circa 1715” with an estimate of $8,000-12,000. Sotheby’s believes, I guess, that it has become more fine and rare than it was 17 years ago. They also give it only a slightly higher estimate than the last time it sold even though in 1990 it sold for $38,000, more than four times the high estimate.

There were several reasons for the 1990 price, one of which is the remarkable state of preservation of the chest. These plain chests with large turned feet would had become anachronisms by at least 1790 and horribly out of place in chambers by the middle of the nineteenth century. Chests like this were dispatched to attics, basement, and barns, often damp settings with dirt floors which meant they started to rot from the feet upwards and nails and locks began to rust. Single brass drop-pulls are no match for strong tugs on loaded drawers and fail early in the life of heavily used furniture. It’s a matter of course for 300-year-old objects to have had multiple sets of drawer hardware changed out when in continual use.

Deep kerfing on the interior drawer front and an undisturbed cotter pin used to attach the brass pull.

This chest of drawers, however, appears as if it were used lightly for several years then put aside in a dark, dry place until moving into the antiques market, perhaps by the 1940s or 1950s. The brass pulls and escutcheons are the originals, the locks and nails are still bright, the turned feet are full height, and there is only a trace amount of wear on the drawer runners. The interior is remarkably clean, absent the centuries of dust and debris that usually accompanies this type of object. Examining a chest in this condition allows for careful scrutiny of the maker’s hand. 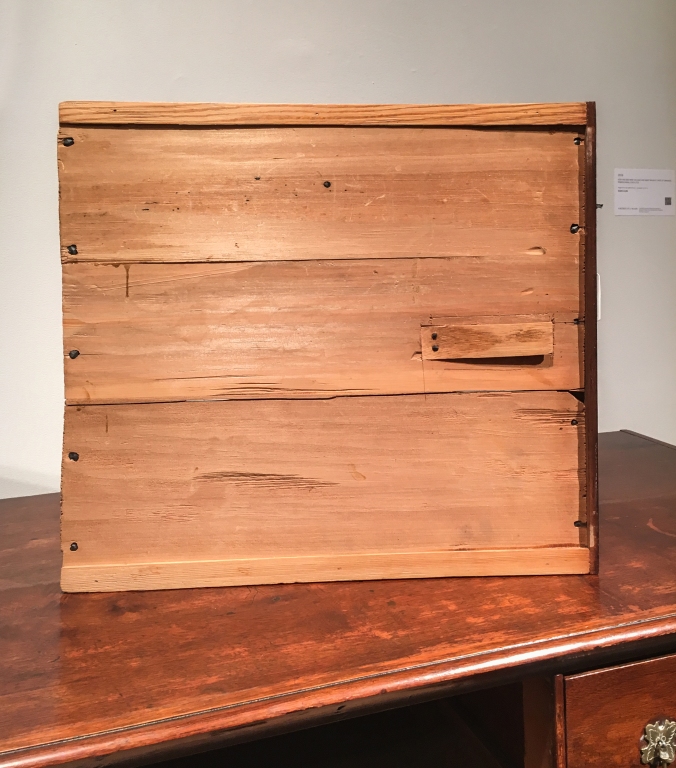 The bottom of one of the two top tier drawers. The bottom board is riven Atlantic white cedar, the side runners are sawn cedar.

And we can make an attribution to that maker: the Philadelphia joiner, John Head (1688-1754). At the 2014 Winterthur Furniture Forum Alan Anderson and I presented “Making it in Philadelphia: John Head and the Joyners Craft in the Early 18th  Century”, where we discussed furniture made in John Head’s workshop, analyzing the materials, tool use, and construction and design strategies observed in furniture documented and attributed to the Head workshop. A broad and nuanced understanding of the shop’s working practice allowed us to attribute numerous surviving objects that have interrupted records of documentation, to Head’s workshop.

Proper right side and back of a top tier drawer showing some of the characteristic white chalk shop marks. These are present on the drawers of all objects attributed to John Head’s workshop. 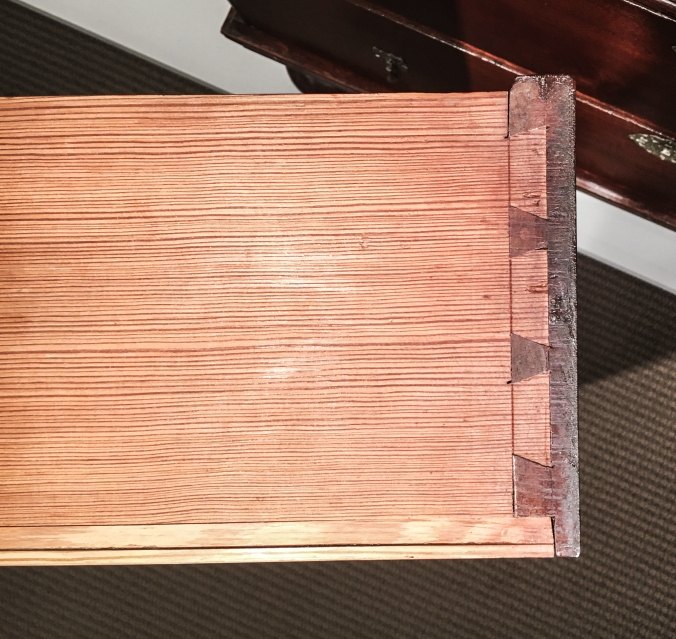 Old-growth, slow growing hard pine sides, Atlantic white cedar bottom board and runner exposed on the side of the drawer. This drawer construction was characteristic of British joiners work beginning circa 1700 according to Adam Bowett.

This chest mirrors every shop practice seen in the documented Wistar high chest and dressing table including, but not exclusive to, wood species selection, details of drawer construction, and idiosyncratic chalk marking for drawer part identification. The evidence of Head’s account book shows he debited for 118 chests at £3-0-0 from 1720 to 1741. These are assumed to be walnut chests, chests designated as cherry or maple were priced higher, consistent to the additional charges for clock cases made of these woods. Surprisingly we have identified few chests of drawers that can be attributed to the Head workshop, some half dozen or so, many fewer than clock cases though Head made more than two chests of drawers for every clock case. Some possible reasons for the high attrition rate are noted above – a large, plain, chest that went out of fashion within 60 years – readily replaced with new models after the still useful storage chest was deposited in a dirt floor out building.

Nevertheless, just in time for his tercentenary, John Head has sent us a time machine of the best sort – but plain. And it’s only January! 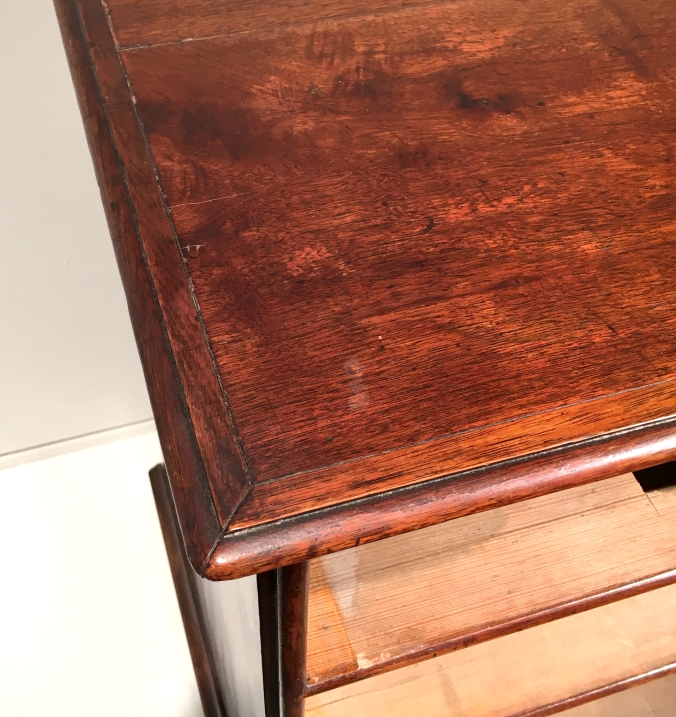 The simple mitered cornice moulding used by the Head workshop eliminates the end grain edges when boards with moulded ends are used for the tops of chests. The sides are lap-dovetailed to the top.

Large diameter turned feet. Blocks glued to the corners of the bottom board allow for better purchase for the dowel that passes through the foot into the chest. 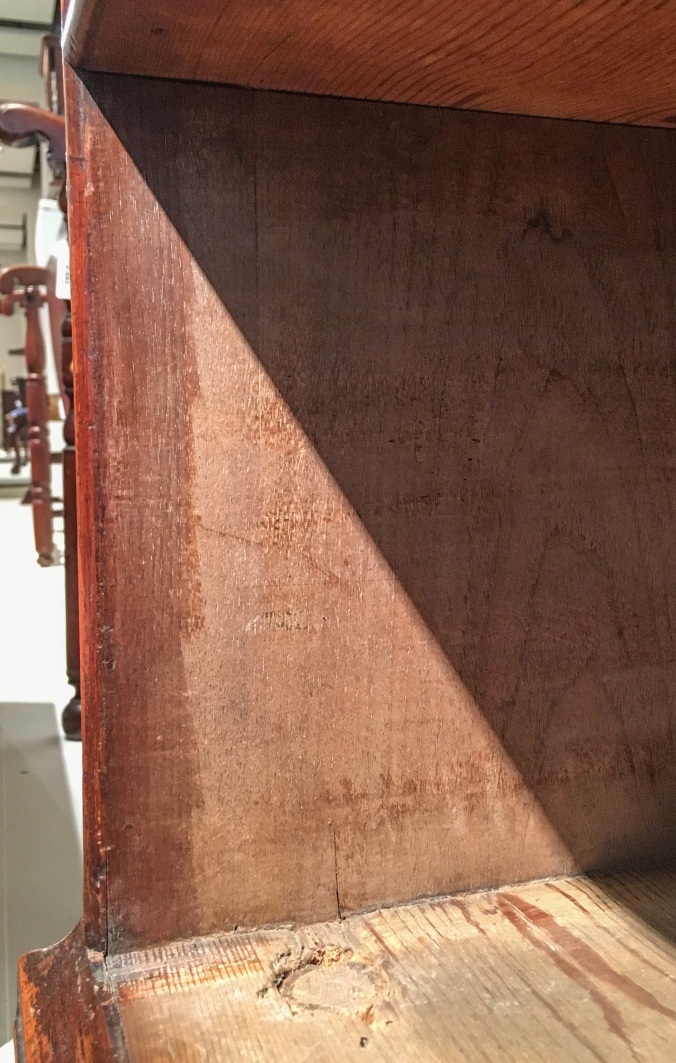 Interior surface of the proper right side. The darkening at the front edge has the appearance of a brushed on stain. A good candidate for microscopic-analysis! 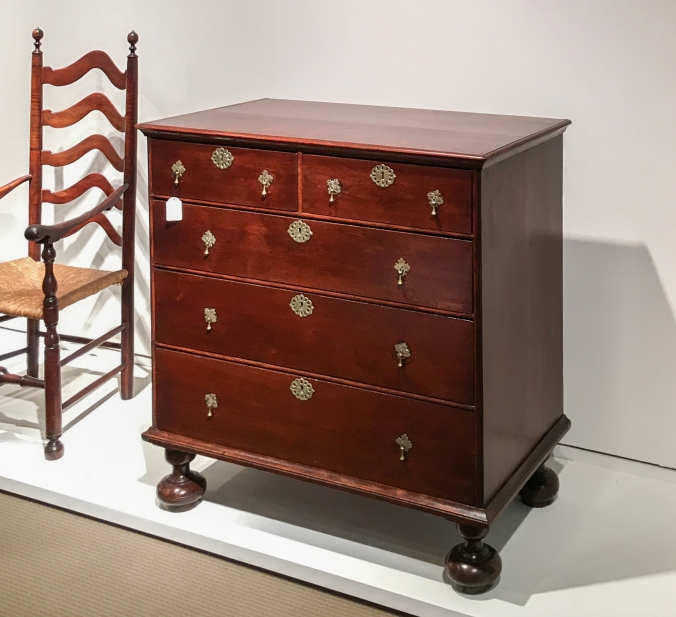 A British Colonial chest made by English immigrant John Head in Philadelphia, circa 1725. The brass single-drop  baluster shaped pulls with cruciform back plates, which were going out of style by 1715 to be replaced by the loop-handle double cotter pin pulls seen on the Wistar furniture, along with the half-round rail moulding, give the appearance of chest made circa 1705.

One thought on ““To a Chest of Drawers””