The Peter Stretch arch-dial 8-day clock housed in a cherry case attributed to the joiner John Head sold at Sotheby’s this past Saturday for $348,500 (hammer price plus buyer’s premium), a sum above its high estimate of $300,000. While not a record for an American tall case clock – that belongs to another Peter Stretch clock in a carved mahogany case purchased by the Winterthur Museum in 2004 for $1,688,000 – it is a record price for any furniture documented or attributed to the workshop of John Head. 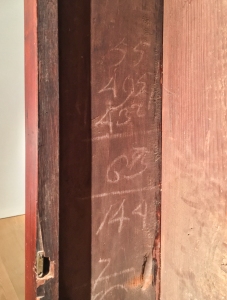 A series of math calculations written in chalk on the interior surface of the side of the waist.

The math calculations continue down the length of the side and were clearly made before the board was cut to width. Written by Head, someone else in the shop, or calculating the purchase price of a parcel of cherry boards?

The blocks at the corners of the base are later additions.

There is physical evidence the base moulding was taller and had a decorative sawn shape similar to surviving mouldings on cases documented and attributed to John Head.

Photograph supplied by Sotheby’s of the base of the case with the blocks removed. Evidence of holes bored for the dowels of turned feet can be seen at the front corners.

It is fitting that a collaboration between John Head and Peter Stretch should garner such a high level of marketplace interest. Stretch’s work, along with that of his sons William and Thomas, represent the acme of clock making in colonial America during the first half of the eighteenth century. This clock and case also represents the most expensive version of John Head and Peter Stretch’s collaborations as Head charged £5-0-0 for clock cases with arched-hoods in woods other than walnut – the most he charged for any clock case – and Stretch charged £15-0-0 for arch-dial clock movements, a total of £20-0-0 for the combined clock and case. (It is unclear at this time whether the pierced name boss with the makers name and location surrounded by engraved foliate scrolls, a pair of birds in flight and the motto “Tempus Rerum Imperator”, added to the £15-0-0 Stretch typically charged for arch-dial clocks.)

The elaborate pierced and engraved name boss. Five cases attributed to John Head house clock movements with similar name bosses, four are engraved with Peter’s name and one with his son William’s.

The moon and tide-dial complication in the arch. Moon dials provide useful information about the night sky at any location, tide dials in combination with moon dials are principally seen on clock movements made in, or for, port cities.

Fennimore and Hohmann speculate the Stretch family of clockmakers produced the type of moon dial seen on this clock between the years 1725 and 1735 and began to employ the elaborate pierced and engraved name boss in the late 1720s. This is consistent with John Head debiting Peter Stretch for cherry clock cases in 1732 and 1737 and a cherry case to John Morris in 1736 – who may have purchased a movement from Peter Stretch on his own account. In 1734 Head charged two other customers £5-0-0 for cases, his price for cases made of cherry, cedar, and mahogany, at the same time Stretch charged them £15-0-0 for clock movements. Thus the date range for the manufacture of the clock sold at Sotheby’s is fairly narrow – roughly the decade of the 1730s or circa 1735 – a more accurate date range than that given by Sotheby’s.

Whether or not more furniture attributed to John Head comes to the marketplace this year, the tercentenary of his arrival in Philadelphia, the tide of interest in this émigré joiner appears to be on the rise.

At the Philadelphia Museum of Art, the William Graham clock in a mahogany case attributed to John Head, circa 1733, has recently been placed between the documented high chest and dressing table made by John Head for Caspar and Catherine Wistar in 1726. The cherry clock case was likely made within a few years of the Graham clock whose intact components confirm the original appearance of the cherry case.