Before I address the preferences, habits, and construction attributes of the shop that produced the Wistar family high chest and dressing table I will attempt to clear up some confusion concerning several issues relating to the appearance and materials of the pair that have puzzled previous historians. In Philadelphia Cabinetmaking and Commerce, 1718-1753: The Account Book of John Head, Joiner, footnote #54, Stiefel writes of the Wistar high chest, “The configuration of the top of the chest has been the subject of controversy.” He is referring to photographs made throughout the twentieth century that show the high chest with a convex-moulded element sitting on top of the chest above the cornice. In some views the moulded element is surmounted by a gallery consisting of short turned pillars.  In the same footnote, he also notes the various lists of wood species said to be used in construction of the pair – the drawer fronts have been described as solid or veneered while the lists of secondary woods sometimes includes the species yellow poplar, a species Stiefel doesn’t encounter in Head’s accounts before 1743.

I was part of the project furniture conservation team that treated furniture in the collection of the Philadelphia Museum of Art as well as loans scheduled to be part of the exhibition Worldly Goods, The Arts of Early Pennsylvania, 1680-1758, Philadelphia Museum of Art, October 10, 1999 to January 2, 2000. During that time, we performed an extensive examination and treatment of the Wistar family high chest and dressing table. The primary and secondary woods species found were typical for furniture made in the Delaware River Valley, 1690-1740. All primary wood is black walnut, including the top of the high chest. The walnut boards are solid, there are no veneered surfaces. The drawer sides and backs, drawer supports, dustboards, backboards, and the corner blocks inside the case that the legs socket into are hard pine, the drawer bottoms and top boards of the lower section of the high chest are Atlantic white cedar. No yellow poplar was found, consistent with Head’s wood purchases observed in his account book.

The earliest published image of the high chest and dressing table are found in Robert C. Moon, The Morris Family of Philadelphia, 5 vols., Philadelphia: Ketterlinus Litho. Mfg. Co., 1909, 5:248. At that time, they were owned by brother and sister John T. and Lydia T. Morris and were photographed in rooms in their house, “Compton”, located in the Philadelphia neighborhood Chestnut Hill. (“Compton” was designed by Theophilus P. Chandler and completed in 1887/88. It was demolished in 1968. It sat on the grounds of what is today the Morrris Arboretum.)

In 1935 the pair was illustrated as plates 12 and 13 in William Macpherson Hornor, Jr’s.  Blue Book Philadelphia Furniture. By this time, they were in the collection of the Philadelphia Museum of Art where they were bequeathed by Lydia T. Morris in 1928. The turned gallery is no longer present but the concave moulding still sits on top of the high chest. 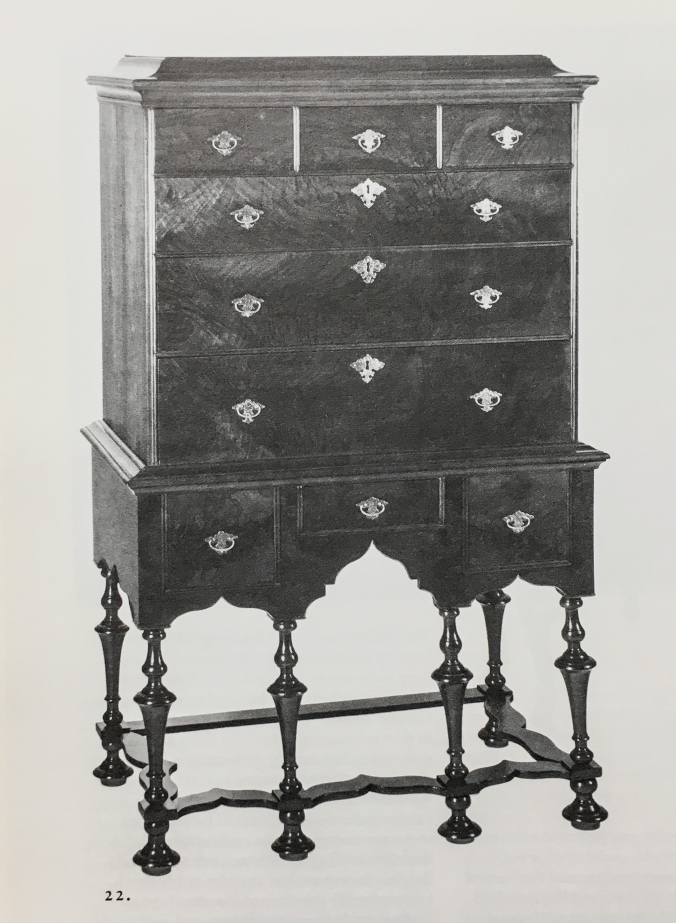 In 1983 the moulded top was removed from the high chest. Museum employees determined it was not original based on physical evidence and from 1983 until early 1999 the high chest and dressing table continued to be exhibited as part of the furnishings of Cedar Grove.

In Worldly Goods, The Arts of Early Pennsylvania, 1680-1758 (The Philadelphia Museum of Art, 1999) the high chest and dressing table are illustrated in fig. 167. But as our treatment of the pair was not completed before the catalogue photography deadline, an early twentieth black and white photograph, colorized for the catalogue, was used showing the moulded top and square drawer escutcheons in place.

At the beginning of our examination of the high chest and dressing table in 1999, I opened a drawer and found the 4 escutcheons that had be removed from the square drawers during a previous treatment in 1975. It was a simple matter to return them to their original positions.

The current condition of the high chest and dressing table as seen today in the PMA galleries and in current photography, reflects the original appearance of the pair more than at any time since they were first published by Moon in 1909. In 1999 we searched the Museum for the moulded top removed in 1983 to determine for ourselves its authenticity but without success – it was likely discarded soon after its removal. We agreed, however, that the top was most likely not original. The top of the high chest consists of two edged-joined walnut boards. The sides are lap or half-blind dovetailed to the top, hiding or disguising the joint. The surface is fair planed, or finished almost as finely as the drawer fronts. If the top of the chest were to be hidden, we reasoned the joiner would have used rough planed secondary wood boards and exposed the joinery, reducing labor and cost if the top were to be covered by an additional element.

It was not long after the Worldly Goods exhibit that I came across another bit of evidence concerning the moulded top – a photograph made at Cedar Grove in the late nineteenth century before the house was moved from Harrogate near Frankford, about 4 miles from Old City Philadelphia, to West Fairmount Park in the late 1920s. In the photograph the high chest has no concave moulded top and the square drawer escutcheons are in place.

In all likelihood, John T. and Lydia T. Morris added the moulded top and gallery to the high chest, updating it for its move to their Victorian mansion in Chestnut Hill. It did no harm and was easily removed, an early instance of a non-intrusive treatment. I wish it was still around though. Click on the photo from the Moon volume to enlarge it. Look closely at the turned pillars of the gallery, they mimic the “trumpet” turned legs of the chest and table. Who made those?

2 thoughts on ““All Right Everyone, Line Up Alphabetically According To Your Height.” Casey Stengel”