On April 25, 2018 Freeman’s sold a black walnut chest-on-stand with a provenance in the Moon family of Lower Bucks County, Pennsylvania.  For the third time in a year and a half, Freeman’s, had offered at auction a previously unpublished furniture form made in the Delaware River Valley in the first quarter of the eighteenth century.  A spice box sold in December 2016 and a chest of drawers followed in November 2017.

Very few chest-on-stands made in the Delaware River Valley survive and less than a handful have been published.  This contrasts with the much greater number of surviving high chests made in the region in the first decades of the eighteenth century. The Moon family chest-on stand is in some ways stylistically similar to high chests from this region. Both the case of drawers and the frame it sits on use dovetailed box construction while the case of drawers of three other published chest-on-stands are constructed with frame and panel sides that sit on mortise and tenoned frames.

One feature of construction the Freeman’s chest shares with the frame and panel chests is the way in which the interior drawer supports and dust-boards are formed.  The dust-boards sit slightly below the runners at the side and the drawer dividing rail at the front.  This allows the nailed-on flush drawer bottoms to run on the side runners without binding on the dust-boards.  The bottom does continue to run on the three-inch-deep front rail. The solution in British case forms to the flush drawer bottoms binding on the dust-boards and front rail was to move the bottom up into the drawer and add runner strips at the sides of the drawer bottom.  John Head was taught this manner of construction during his apprenticeship in England, roughly 1702-1709, and continued to employ it after he arrived in Philadelphia in 1717. The joiner of the Moon family persisted in fashioning “first-phase”, nailed-on flush bottom drawers after other joiners had adopted raised drawer bottoms with glued-on runners.  He did however, understand the impediment to a smoothly running drawer this created and crafted his own, if partial, solution.

I’ve called this form a chest-on-stand because a chest of drawers is placed on a frame with a single long drawer.  But how was this frame originally supported?  Currently the lower frame is fitted with six small turned feet as opposed to a taller turned legs joined by flat stretchers with turned feet below seen on contemporary chest-on-stands and high chests.  The feet are fit to the frame with separate dowels that pass through the feet and into holes bored in glue blocks at the corners of the frame. 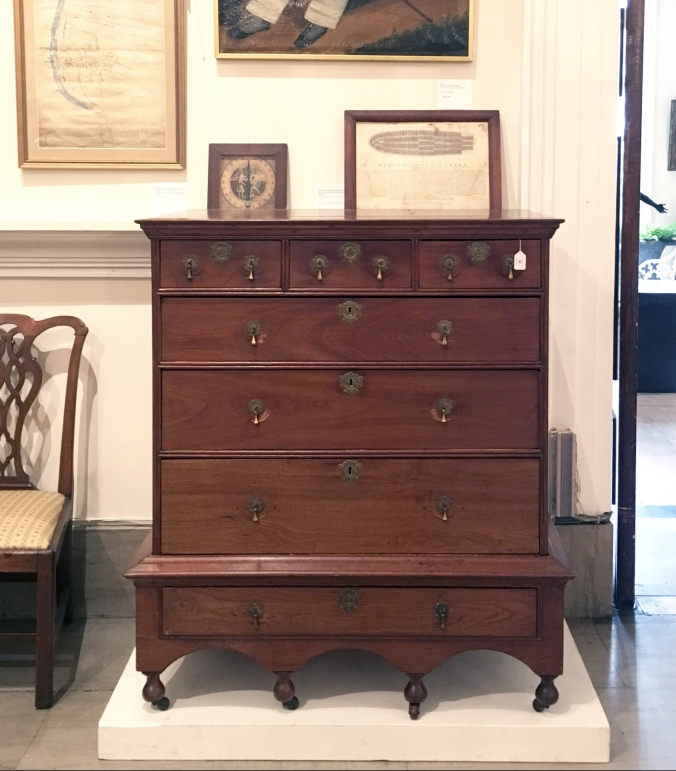 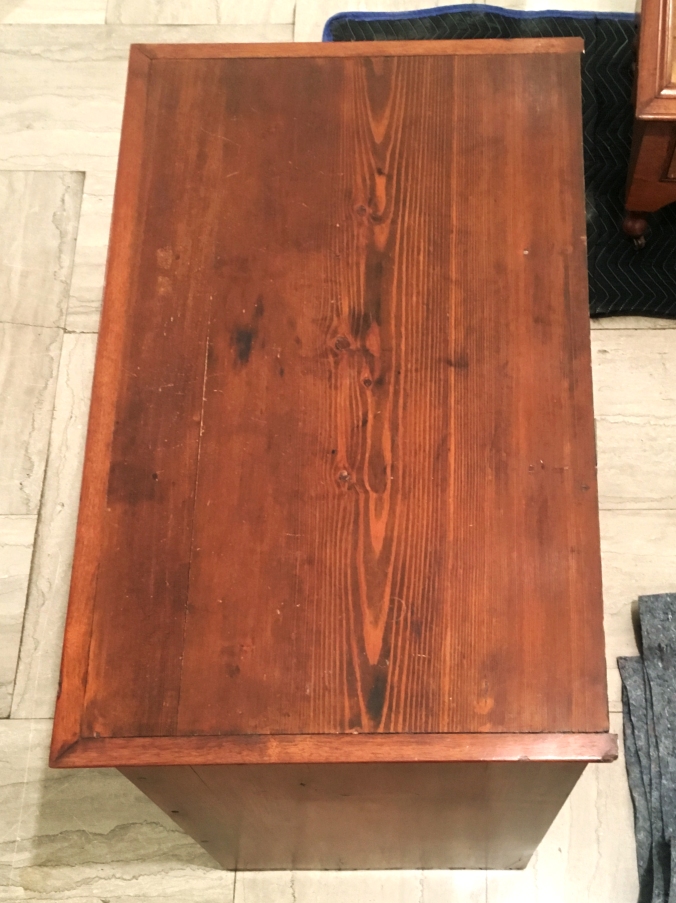 The top board of the chest is hard pine. 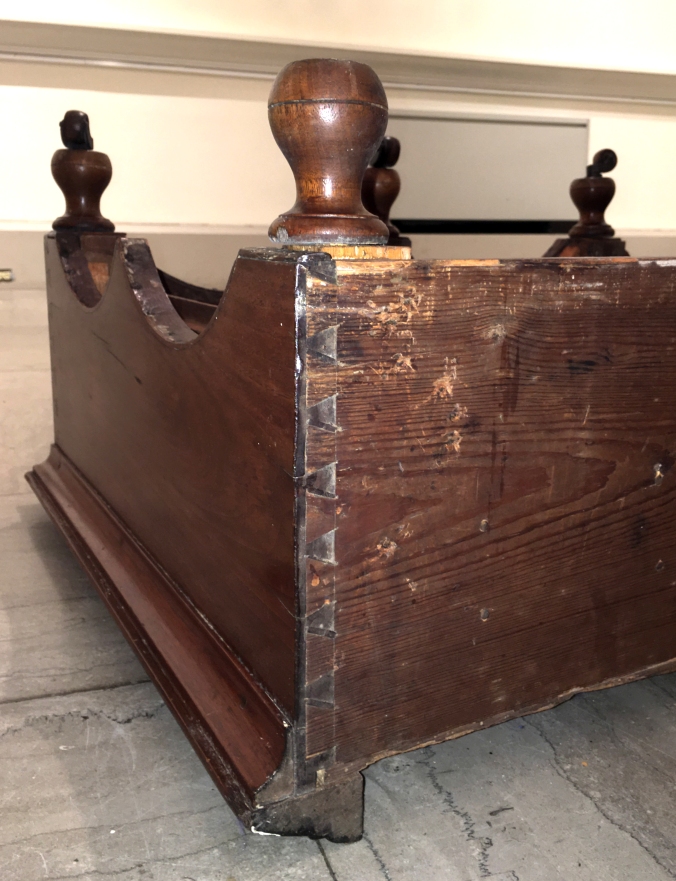 The back of the lower carcase showing the dovetail box construction.

The bottom of one of the small drawers in the upper case. The riven Atlantic white cedar drawer bottom is nailed to the sides and back and a rabbet in the front. All the drawers are similarly constructed. A faint trace of the missing spring lock can be seen at the center/front. 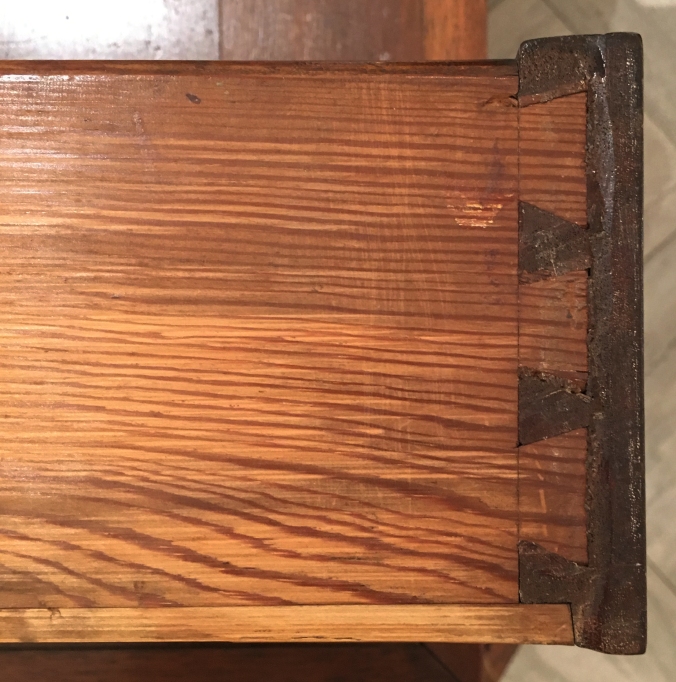 The sides of the drawers are hard pine and many of the dovetails are wedged. 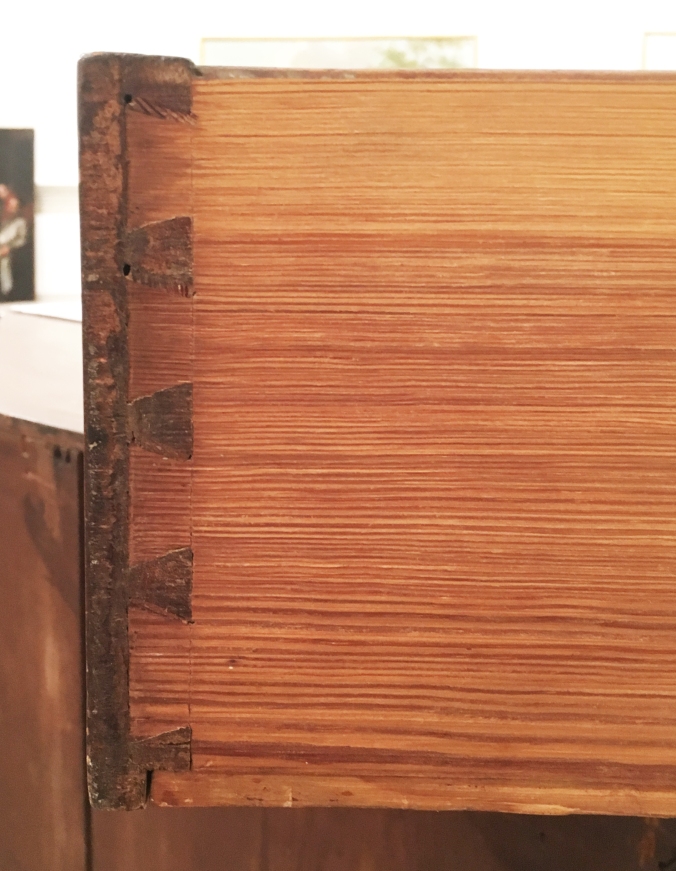 Another drawer side. The wedges are fit both to the center of the pins and along side them. 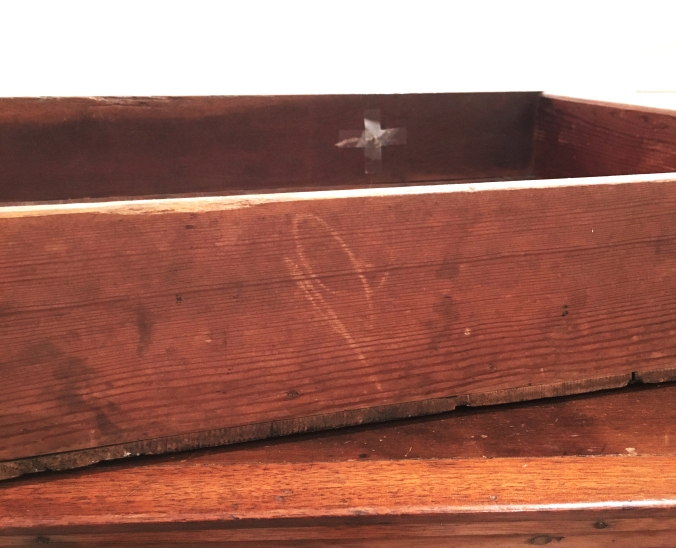 Drawer part orientation markings in chalk are visible on the exterior surfaces of drawers.

Interior of the upper case. The dustboards sit below the drawer runners at the sides. 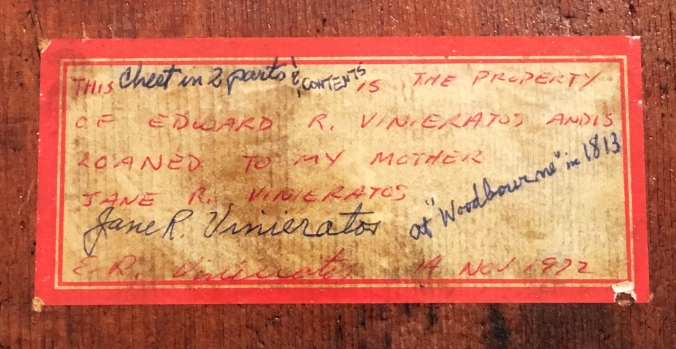 A label on the interior with family history recorded.

Another inscription written on a dustboard in the upper case.

Underside of the lower carcase. 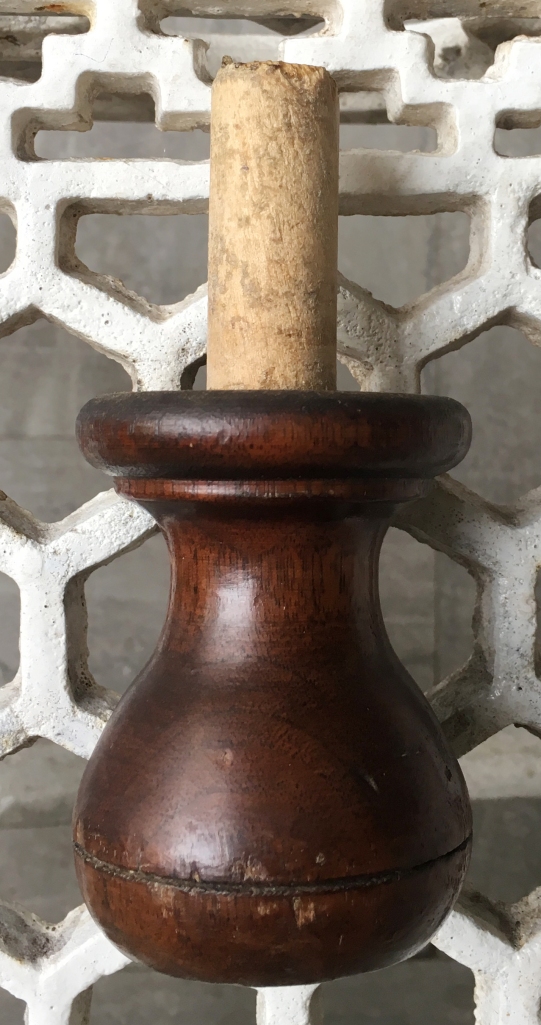 Detail of a turned foot. 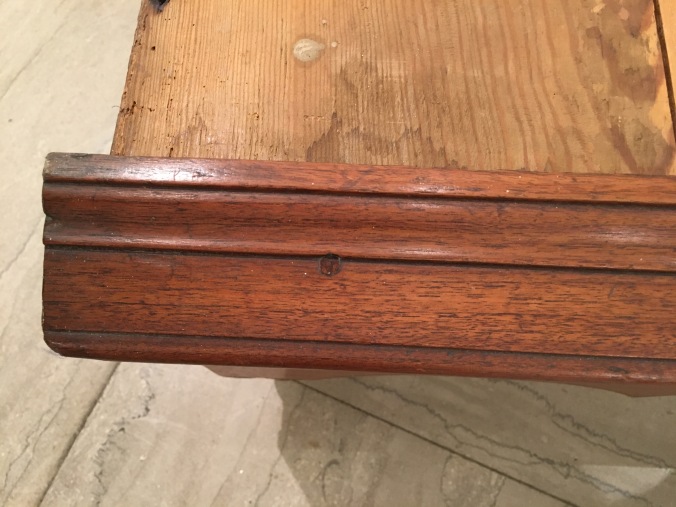 Mouldings are pegged to the chest.

The interiors of the drawer fronts show no saw-kerfing extending past the sides. 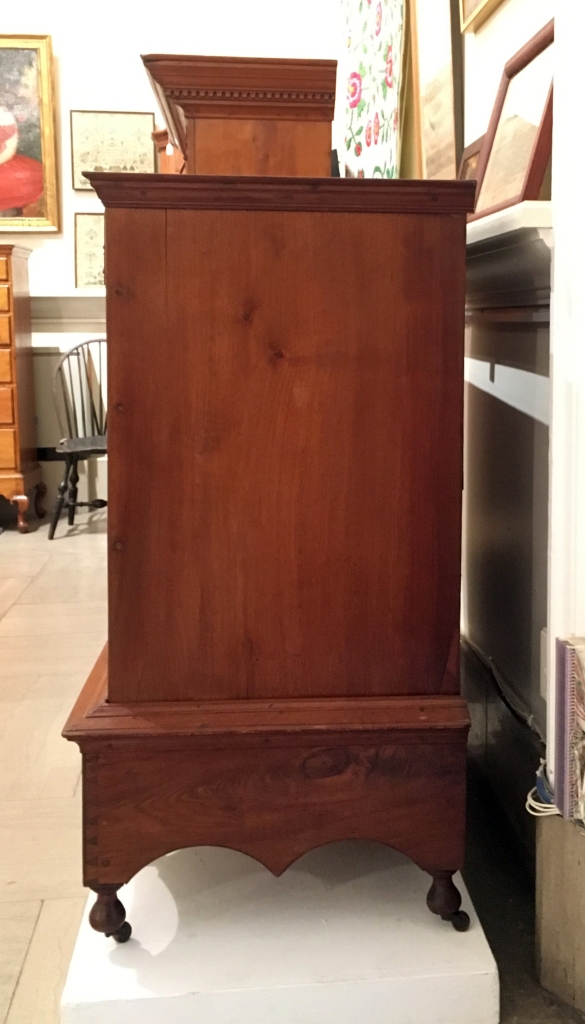