John Head and his journeymen and apprentices knew how to make boxes.  They made scores and scores of boxes; carcases of chest on chests, high chests and dressing tables, spice boxes, desks, 4-tier chests of drawers, or the drawers they contained.  Hundreds of “boxes” were produced by joiners in the Head shop from the end of the 1710s to the mid 1740s. They needed to make them quickly and efficiently. Examination of carcases and the drawers in them documented and attributed to the John Head shop  show us some of the ways they did this. In many respects, their dovetailed box production was similar to the majority of work done in most British and British colonial shops but several of Head’s ways of working reveal he was ready to break with aesthetic tradition to produce boxes more quickly than his competitors.  Head may have had training in veneering carcase work before he immigrated to Philadelphia, but after he arrived here he would only work with solid wood carcases and drawer fronts. This required lapped, or half-blind, dovetails cut at the front corners of drawers, the top of chests, and the front and rear corners of dressing tables, as these joints would not be covered with veneer and the end grain of the dovetails would otherwise have shown in the finished work. 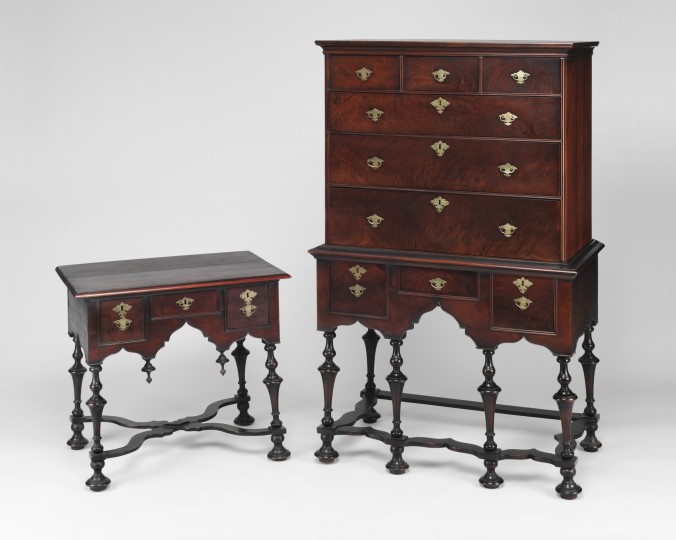 High chest and dressing table, made in Philadelphia, 1726, by John Head for the German immigrant Caspar Wistar and his wife Catherine Johnson (or Jansen) Wistar at the time of their marriage. Philadelphia Museum of Art.  Solid black walnut carcase and drawer construction.  Lapped dovetails at the drawer fronts, at the top of the upper case of the high chest, and at the front and back of the dressing table carcase. 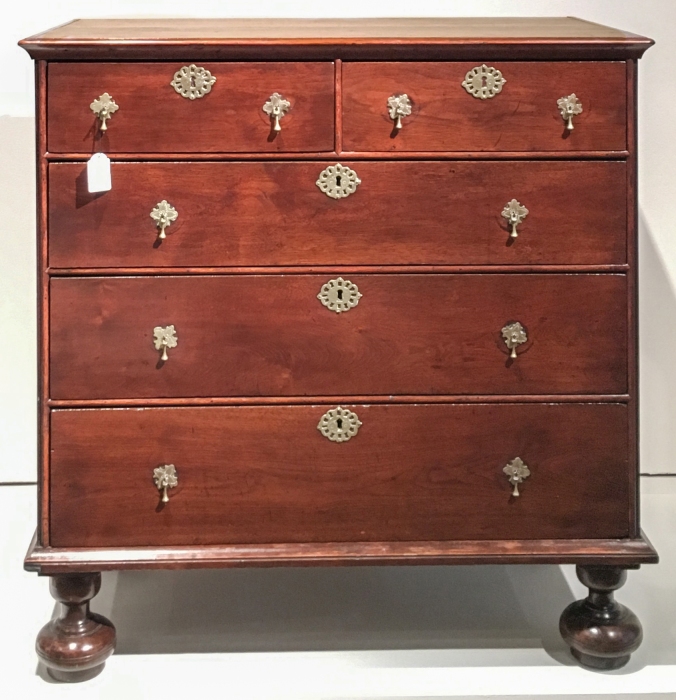 Chest of drawers, attributed to John Head, Philadelphia, circa 1725.  Chests of drawers were constructed in an identical manner to the upper carcases of high chests of drawers. The sides of the chest are lap-dovetailed to the top.  In other words, the dovetails are cut on the sides and the pins are cut on the top board.  The cornice moulding covers the joint along the sides.

Most important for efficiency in producing carcase work with drawers was the fact that in Head’s shop, carcase construction and drawer construction were nearly identical.  If you taught an apprentice how to design, mark out, and construct a drawer with a lapped dovetail front, that would be all they needed to learn to produce any carcase or drawer in the future, for the carcase is just a drawer stood on end and turned round.  The front of a drawer corresponds to the top of a carcase, the sides of the drawer correspond to sides of the carcase, and the back of the drawer, to the bottom of the carcase. The bottom of the drawer is equivalent to the back of the carcase.  This is not particular to Head’s shop, other joiners worked this way. But many British joiners making veneered carcases cut the dovetails on the top and bottom boards of a carcase. Head reversed this so the dovetails were cut on the side boards so that the dovetails were lapped to the top and not visible when looking at the top board of a chest of drawers, high chest, or spice box, making the construction of a carcase equivalent to that of a drawer. 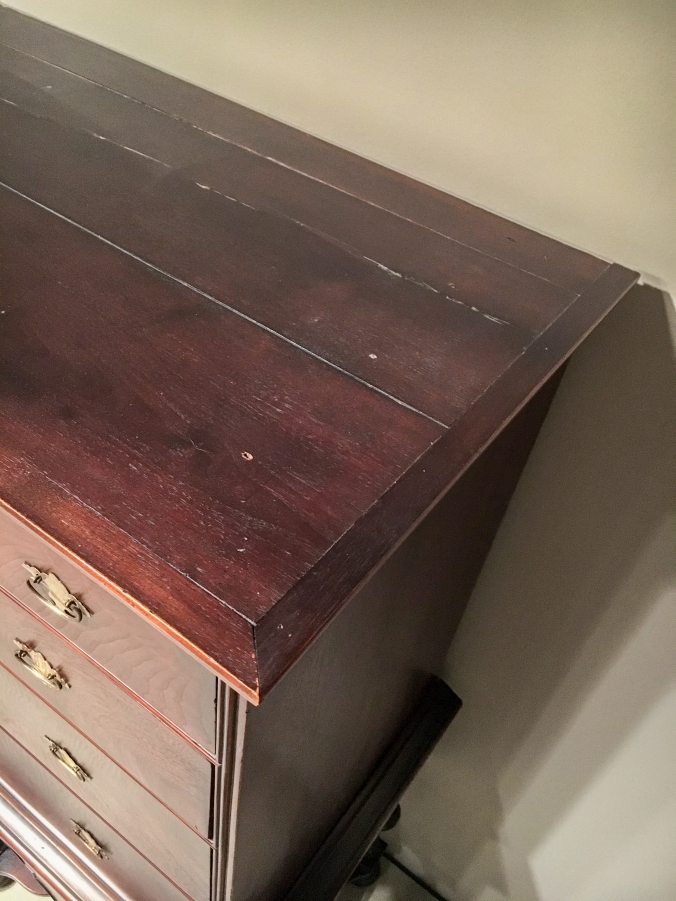 The sides of the upper carcase of this high chest are lap-dovetailed to the three board walnut top. As with the previous chest, the cornice covers the joints at the sides.

Anyone who cuts lapped dovetails knows the greater difficulty in removing the waste of the dovetail recesses in the pin board then when cutting through dovetails.  To decrease the difficulty, Head continued his saw kerf well past the gauged line on the interior surface of the drawer front. Other joiners did this as well and it is sometimes seen in London work but it is rare any joiner exceeds the lengths of Heads kerf cuts which often extend over two-and-a-half inches past his gauged layout line.  Many joiners chose not to saw past the gauge line for what must only be aesthetic reasons.  And no woodworking student has been taught to run saw kerfs past the gauge line for many decades.  Even slight over-cuts are today considered sloppy work. 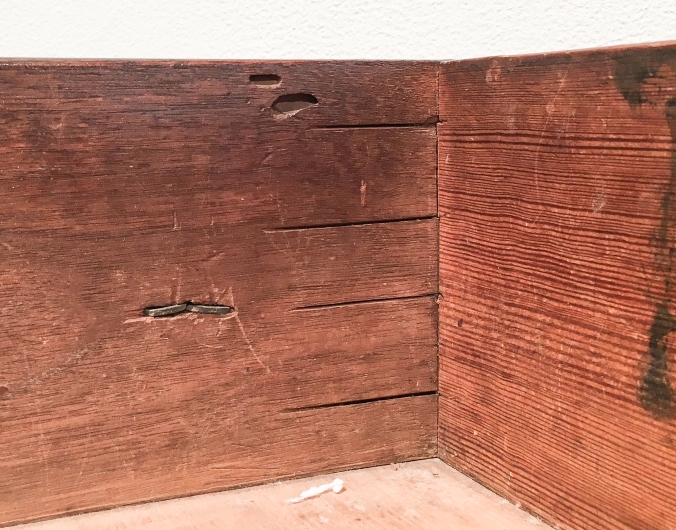 Drawer from a chest of drawers attributed to John Head. Kerf cuts on the interior surface of the drawer front extending several inches past the gauged or scribed line that indicates how far the side is set into the end of the drawer front.

Kerfs extending nearly a third of the way across the interior of the drawer front. Head and the other joiners in his shop routinely sawed the dovetail recesses in the drawer front in this manner allowing the waist then chopped out of the recesses to be removed more quickly. Head’s customers obviously accepted this appearance, the outcome of his method of working. 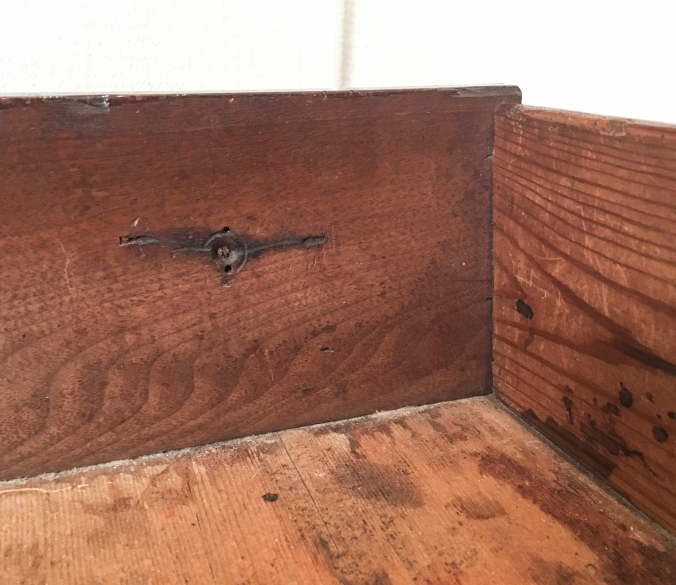 Not all of Head’s contemporaries over-cut the gauged lines on their drawers.

With the enormous amount of carcase and drawer work produced in Head’s shop, there would have been many occasions when more than one chest was being constructed at the same time.  The chalk shop markings seen at the back of drawers on Head’s documented work and work attributed to his shop, facilitated an efficient work flow. Not only did they help identify the numerous drawer sides and backs in piles on the bench waiting to be worked into drawers, but the size and shape of the markings helped in quickly identifying and orienting the parts during joint cutting. 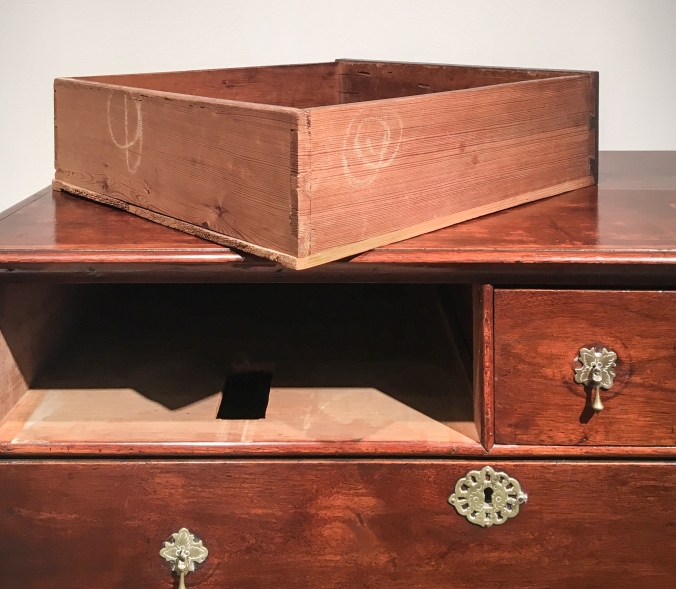 Chalk shop marks occur on the exterior surfaces of the backs and sides of all drawers documented and attributed to the Head shop. Four drawn shapes are associated with the shop. 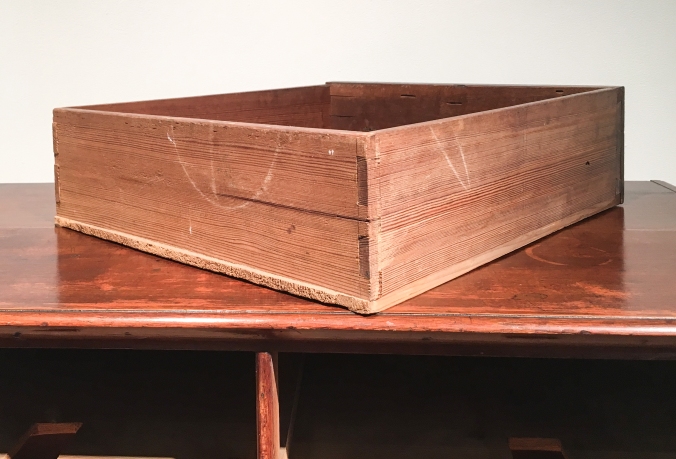 Similarly placed, but differently shaped chalk marks appear on another drawer from the chest in the previous image. 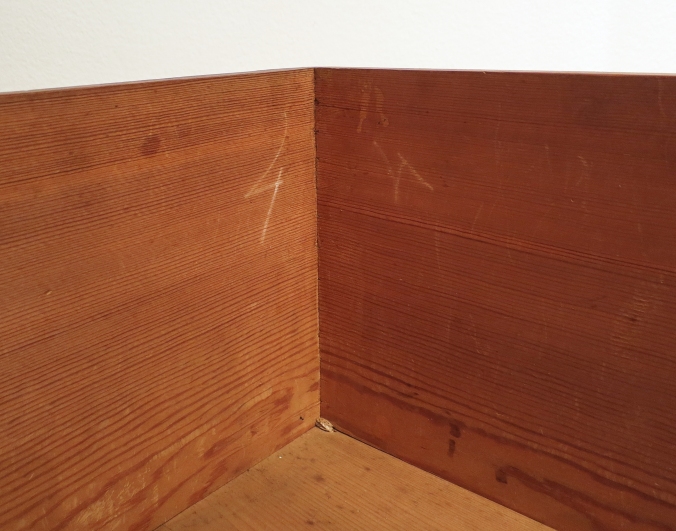 Other shops besides Head’s used drawer part identification systems, at times on the exterior surfaces as Head did, but also on interior surfaces.  Sequentially numbering the interior corners of the drawer parts was, and still is, a common way of orienting drawer parts.  Here it is done in white chalk as Head’s shop used. 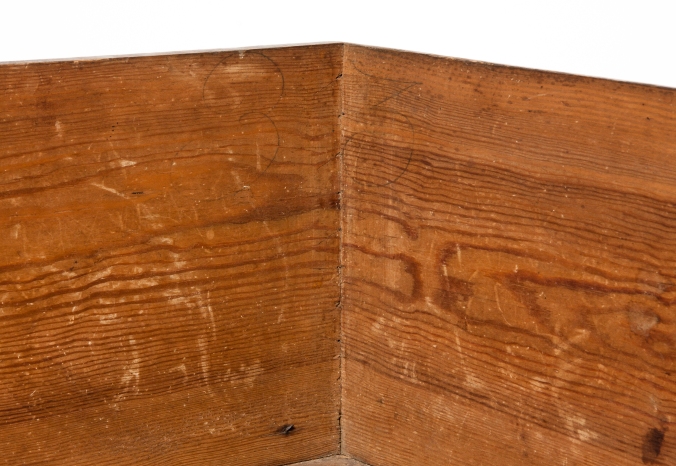 In the next post I’ll make a small drawer in the style of John Head as a way of investigating the drawer construction process.  How was the drawer front supported while sawing, how were the shop marks used to rapidly select and position drawer parts during joinery and assembly?  Knowing vs. Doing?  Doing is Knowing? 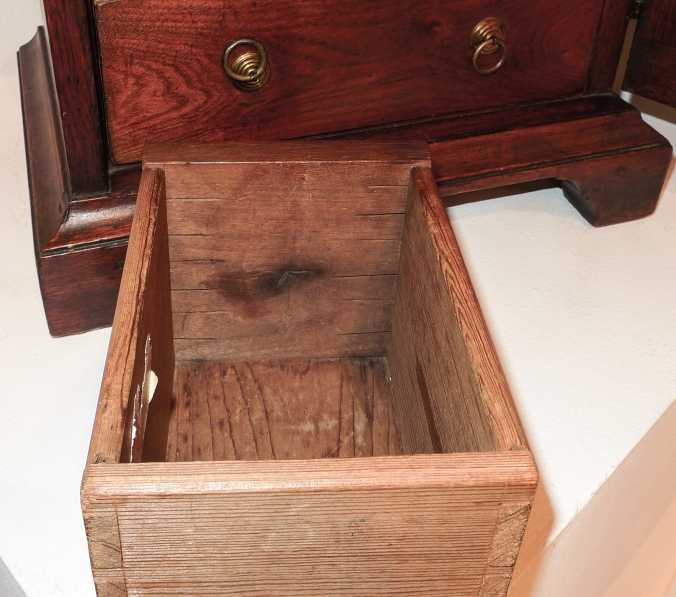 This is the center square drawer from a spice box attributed to John Head I will reproduce for the next blog post. 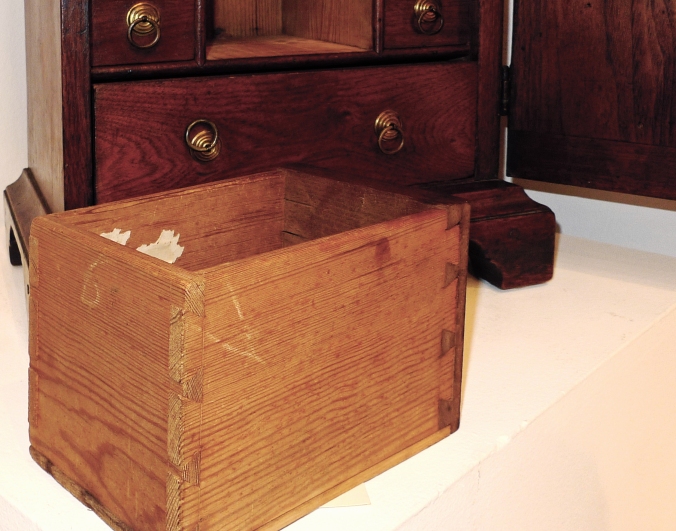 The center drawer from the spice box. Chalk shop marks and long kerfs on the drawer front interiors.  I’ve made many boxes and cut hundreds of dovetail joints in my woodworking career, but we’re always learning.  So perhaps the better title for next time is “Doing is Learning.”

7 thoughts on “Boxes in Boxes”