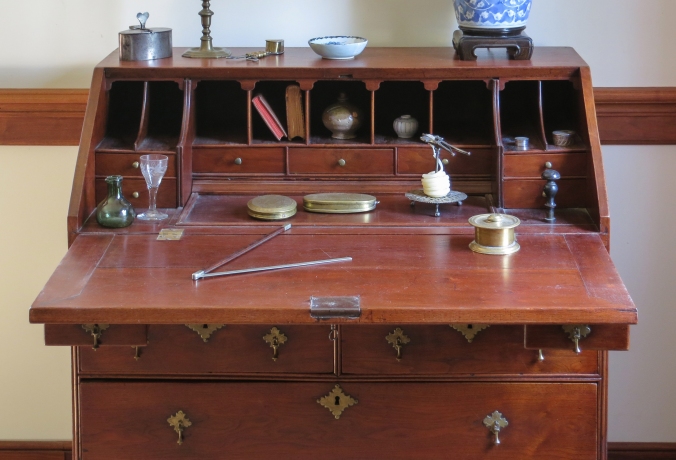 For a lack of other surviving desks that can be attributed to John Head’s shop, we have no way of knowing if the writing compartment is typical of his work.  More or less elaborate interiors may account for some part of the range of prices Head charged for desks.

Along the back at the center of the writing compartment are five divided openings over three drawers.  In front of the drawers is a board that slides towards the back revealing another storage space commonly called a well.  Wells were a common device seen on desks in the first decades of the eighteenth century, but by the late 1730s, they were were on their way out of favor, replaced by an additional drawer above the long drawers of the desk that could only be accessed when the fall was closed.  The desk is “winged”, a term found in Prices of Cabinet and Chair Work, Philadelphia, 1772 which refers to the fact the pair of drawers on the sides of the writing compartment have “flown” past the central bank of drawers, creating framing for longer drawers that could fit documents and writing implements that the shorter drawers at the center could not accommodate.

A filet and cove motif reoccurs everywhere on the desk, as it does in all Head’s designs for furniture. The wings are a large version of this motif and here, on the valences along the top of the writing compartment, Head created a miniature version.

The drawers in the writing compartment utilize Head’s system of drawer part identification. 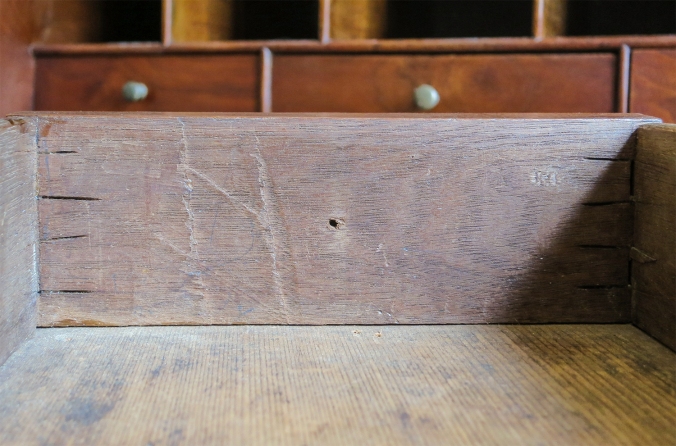 The drawer fronts have saw kerfs that extend past the gauge lines as we’ve come to expect in drawers made in Head’s shop, but, like the long drawers of the desk, they are not as long as other examples we’ve seen.  We know that Head had apprentices and it’s operations such as this technical example of sawing, which Head had no reason to control or compel an apprentice or journeyman to do differently and which had no effect on the outward appearance of an object, where we can observe the work of different hands.

Ink spills and ink stains are found in a majority of historic desks.   A large swath of the bottom of this drawer is stained with a dark ink.  Head constructed the small drawers of the writing compartment in a different manner than the large, long drawers.  The bottom board is fit to rebates in the sides and back as well as the fronts.  A user of the desk would work more intimately with these drawers, view them more closely and when working, might remove them and sit them on the writing surface for easy access to their contents.  The rebated bottom makes for a neater appearance, with no edge or end grain of the bottom visible. Notice that the bottom corners where the sides and back meet are mitered.  In this case, it is not decorative or for neatness of appearance – the top corners are not mitered – but an efficient way to deal with dovetailing boards that are rebated.

Owners of desks, their family members, and others conversant with desk construction in general would have been acquainted with the structure and use of wells, even without the presence of a finger pull carved in the well lid that would suggest the board was meant to move.  (To open the well lid you must apply light pressure with you hand on the top surface and begin pushing it towards the back, once open far enough you can push on the edge of the board to open it fully.) But only those with intimate knowledge of this desk would have known of its hidden compartment.  The two sections of double arch moulding framing the sides of the well lid appear to be glued and/or nailed to the framing members of the writing compartment as, indeed, the moulding at the front of the well is.  But they are not fastened, and when they are carefully removed, a narrow drawer below the center row of drawers, its front decoratively moulded, can be slid forward –  a hidden storage space is revealed. 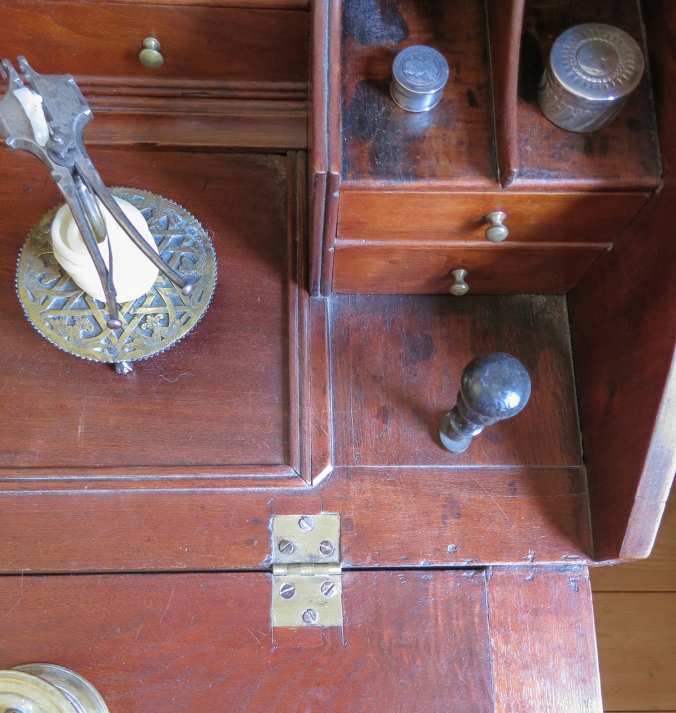 Looking down at the floor of the writing compartment.  Double-arch moulding surrounds the well. 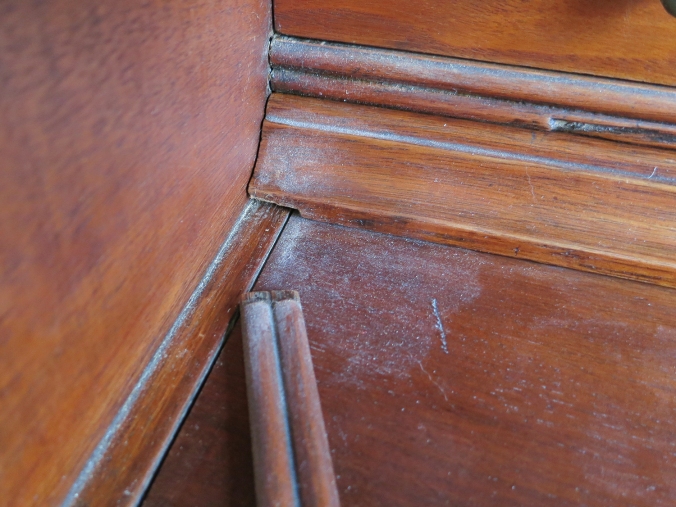 But the mouldings at the sides are loose, held in place by the fact they are notched into the moulding below the center drawers. 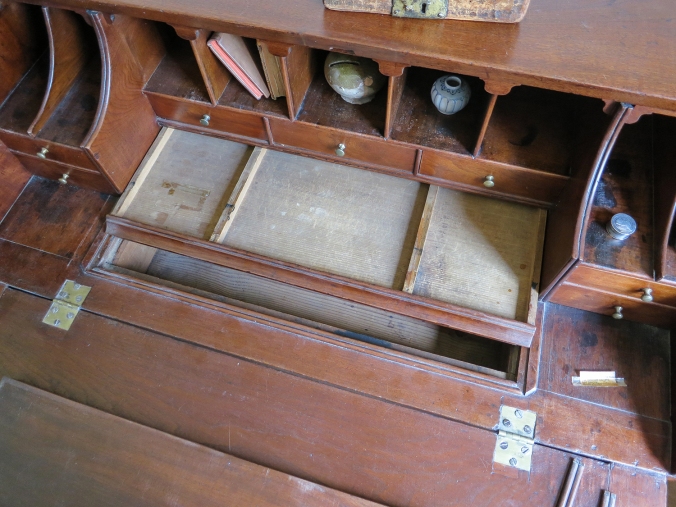 When both side mouldings are removed, the hidden drawer can be slid forward.  In this view, the well lid is pushed to the back of the desk.

In this view the well lid and hidden drawer have been removed.  Alas, not gold coins were found!

A front corner of the hidden drawer, dovetailed and nailed.

The nailed on bottom of the hidden drawer. 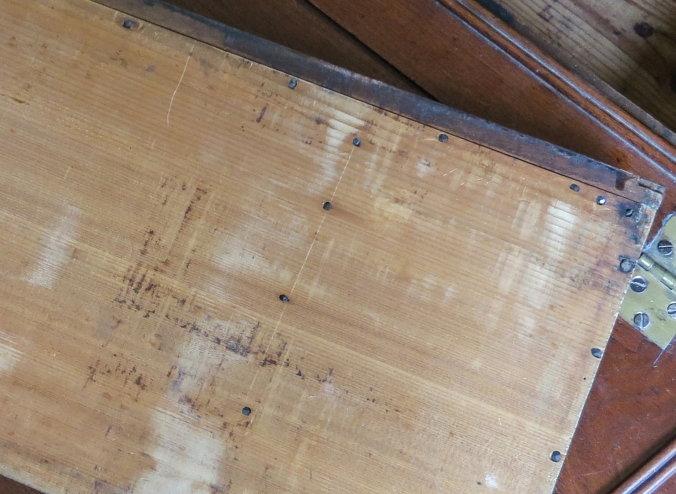 Scribe lines for nailing the dividing strips in the hidden drawer.  Along with dividing the long, narrow drawer into compartments, the strips add strength to the rather thin bottom board.

No dovetails at the rear corners of the hidden drawer and the back is split into three segments with the dividing strips continuing to the back of the drawer.  Glue and nails hold this drawer together.

The under side of the well lid.  There are rebates at the front and sides and two carved finger pulls at the front.

A chiseled and gouged finger pull.

Next: “To a Walnut Dask”, Part III, Various and Sundry.

5 thoughts on ““To a Walnut Dask”, Part II, The Writing Compartment.”